AP: Hawaii may be breaking law by allowing foreign men to fish 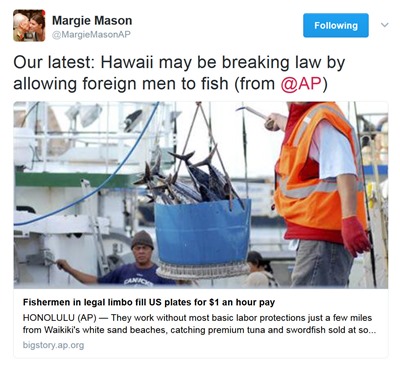 The AP tweet is “Hawaii may be breaking law by allowing foreign men to fish.”

But as astute readers of Disappeared News, you already knew that.

The latest AP story reiterates our reports that Hawaii is issuing commercial fishing licences to foreign fishermen in violation of state law.

Hawaii's boat owners pay brokers up to $10,000 for each crew member sent from abroad. Because the workers don't have visas, they aren't allowed to arrive at Honolulu's airport. Instead, they're flown to foreign ports and put on fishing boats for long sails back to Hawaii.

Before they start working, they need a commercial fishing license. And in order to get that, Hawaii requires that they are "lawfully admitted" to the U.S. As proof of legal admission, state officials point to landing permits issued to all fishermen by U.S. Customs and Border Protection agents when the men arrive at the dock.

Here's the hitch: AP has learned Customs agents stamp "refused" on all the landing permits, which voids them. So instead of being "lawfully admitted," the fishermen are actually barred by law from setting foot in the U.S.

The AP story introduces some new information. Check it out.

And think twice before you purchase fish that may be caught by fishermen working in abusive or near- slave labor conditions.