This is how the state spends your taxpayer money. 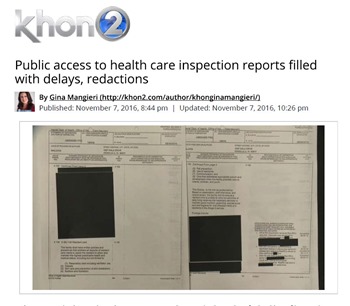 Kokua Council’s lawsuit to compel the state Department of Health to post inspection reports which seniors and others depend upon when a loved one must be placed in a care home will be heard this Thursday, Feb. 2, at 10:30 a.m. in Judge Nakasone’s courtroom on the 5th floor of the courthouse at 1111 Alakea St. corner Hotel St.

[Disclosure: I am on the board of Kokua Council.]

What is the Department of Health required to do?

§321‑     Inspections; public notice.  (a)  Beginning with inspections occurring on January 1, 2015, the department of health shall post on its website electronic copies of reports for all inspections it performs of the following state-licensed care facilities:

(b)  Each report shall be posted on the department of health's website within five working days of the conclusion of each inspection and shall include the following information:
…

Having to defend their non-performance in court is such a waste of taxpayer money. Let’s see how it goes, of course, but the basic argument seems simple enough—that the law requires these reports to be posted but the DOH is either not posting them or is posting documents so heavily blacked out (as in the KHON screen grab above) that the information is useless.

DOH resistance (at taxpayer expense, of course) seems all the more questionable since the Legislature has two bills, each with a long list of sponsors in each house, to fund the posting of the reports (see SB538 and HB433).

It’s also important to understand that the Legislature not only passed Act 213 in 2013 requiring the posting of inspection reports starting in 2015, but it apportioned money at that time for the purpose. The DOH did not hire and the $148,000 lapsed.

They have argued that they don’t have the resources to post the reports. They had resources but didn’t use the money to hire anyone. If one of these bills passes, they will have resources again. Will they hire someone this time? Don’t they have to follow the law anyway??

Here’s my best understanding of what happened with the positions:

I wonder what the judge will do Thursday.