2017: Honolulu still has no plan for needed affordable housing while rail could increase rents and traffic


“
“Displacement [caused by transit improvement] is a real concern,” said Thomas K. Wright, the president of the Regional Plan Association, an urban policy group. “When you increase the values in areas like this, you need to do things to protect affordable housing and retail.—New York Times: Second Avenue Subway’s Arrival Brings Fear That Rents Will Soar
”

It’s always sad when a popular restaurant or a generations-old family shop closes due to untenable rent increases. Landlords are not known for their consideration of community or historical values. To me, it’s doubly sad to watch the premises remain vacant for months or sometimes years because no one is willing to pay the new rent demands.

As to apartment or home rentals, can rents in Honolulu increase any more?? Yes they can. All it would take would be completion of the oft-delayed and massively overbudget rail line. It’s not just common sense but the demonstrated effects of this aspect of gentrification on communities everywhere. 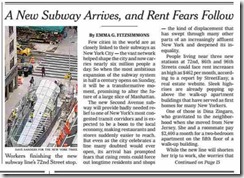 A story on the front page of today’s New York Times illustrates how this works:

The new Second Avenue subway will provide badly needed relief to one of New York’s most congested transit corridors and is expected to be a boon to the local economy, making restaurants and stores suddenly easier to reach. But even as the city celebrates a line many doubted would ever open, its arrival has prompted fears that rising rents could force out longtime residents and shops — the kind of displacement that has swept through many other parts of an increasingly affluent New York and deepened its inequality.

People living near three new stations at 72nd, 86th and 96th Streets could face rent increases as high as $462 per month, according to a report by StreetEasy, a real estate website. Sleek high-rises are already popping up above the walk-up apartment buildings that have served as first homes for many New Yorkers.

Honolulu can be no exception to this rule. Already “sleek high-rises” are popping up, particularly in Kakaako, an area that by any logic should have been developed to include mostly workforce housing but instead will leverage the planned rail stops to install luxury and ultra-luxury housing in the city center.

The New York Times article supports fears that rail in Honolulu will drive up home values and hence rents. Why expect that we will be any different than the areas mentioned:

Across the United States, good transit access often leads to higher real estate prices, with home values near rapid transit in Boston, Chicago, Minneapolis-St. Paul, Phoenix and San Francisco far outpacing other properties during the last recession, according to a report by the American Public Transportation Association.

Keep in mind that as we enter 2017, Governor Ige’s emergency declaration of emergency over homelessness has been allowed to lapse without the creation of any plan for the needed 20,000, 22,000, 60,000 or 64,000 new housing units (depending on the time span and which news article you are reading). Indeed, while Mayor Caldwell’s 1 a.m. and 3 a.m. sidewalk sweeps continue in all their cruelty, and the count of street dwellers increases annually, there is no plan that will provide the needed housing.

Instead there is a hope or belief, shared by organizations such as FACE (Faith Action for Community Equity) that the rail line will bring affordable housing to Honolulu. I mention this organization mainly to illustrate that this claim for rail transit may be based more on “faith” than on “logic.”  Experience tells us that rents will increase. Housing will become more unaffordable, not less. Nor is there protection here similar to New York’s rent control and rent stabilization laws.

Affordable housing in large numbers of units is needed not just to clear Honolulu’s sidewalks, which has been the almost universal cry in the press and the only policy objective of city government. Affordable housing is needed by residents who are sheltered but just barely—either sharing rooms or living at risk of eviction if they become sick and can’t make the rent next month.

As the rail line moves towards completion the risk of rent increases only further endangers those who can barely make the rent today.

In the absence of any plan for affordable housing it is predictable that the crisis will worsen.

Add to this the loss of Honolulu’s best agricultural land to housing development. Nor are we planning for the traffic impacts of this central Oahu building boom. As rail brings further development the number of vehicles—cars and trucks both—on the roads increases, not decreases. Claims that those commuting to town by rail will reduce traffic are likely false. Rail does not decrease the number of cars on the roads simply because other cars will immediately take over the downtown parking spaces vacated by the new straphangers.

There’s also a new unknown that could impact housing in Honolulu as well as the rest of Hawaii: moves by the Republican administration in Washington to cut benefits or programs for the elderly, disabled and those needing food assistance would literally pull money out of people’s wallets. There will be even greater pressure for lower-cost housing, which is not now and won’t be available any time soon.

What to do? Deal with it. Let the people plan their own urban environment including housing, agriculture and transit. The politicians, many firmly in the pocket of rail and development interests, have failed us.

There is a methodology that can be used called “charettes” in which citizens meet in workshops with the option of consulting experts—architects and engineers—and come up with their own plans. Yes, the methodology can be “hijacked” by pre-determining the outcome and only superficially involving the public, and that’s usually what happens here when the residents of an area (such as Chinatown) are gathered and “involved” in city planning. All that I’ve been to have been a farce, though I have also missed some others that may have been better.

The University of Hawaii has a very capable urban planning department. Instead of listening to city government we could benefit by looking to UH for guidance. If you are curious about that might work check out these programs on `Olelo that demonstrate both that they can provide the resources we need and that ordinary citizens are interested in learning and using those resources.

“Planning to the people,” I say. And hurry up, please.