Will Hawaii remain a leader in solar installation? Or rather, how do we salvage a wounded solar industry?


“
To understand the effects of smart solar inverters on utility systems, there’s no better place to study them than Hawaii. The state has the highest electricity rates in the United States, which, along with incentives from the utility, has given residents and businesses powerful motivation to install their own PV systems. The state now has about 20 times as many solar installations connected to its grid as the average mainland state does, and that trend is likely to continue.—IEEE Spectrum
”

IEEE Spectrum is a remarkable magazine in several ways. It’s technical, of course, since it is published by the Institute of Electrical and Electronics Engineers. Yet most of the articles are accessible to a more general audience. 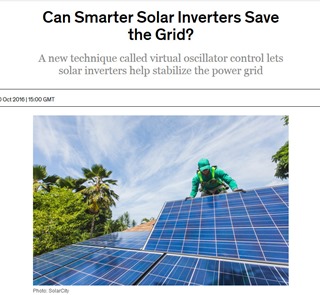 Also, they post many (most?) of the printed articles to the web. Anyone can read these, a great service.

The pull-quote above is from a current article in the magazine: Can Smarter Solar Inverters Save the Grid? and is all about Hawaii.

It turns out that programmable inverters are actually the best way to solve the grid instability issues presented by the interconnection to HECO’s power grid of so much rooftop solar. What kind of inverter are they talking about? Check out the article, it’s not so complicated. In a nutshell, the inverter reacts on its own to correct voltage or frequency imbalances, performing a service to all grid users.

Sending commands from a central point to control thousands of inverters simply won’t work properly. This will.

Now, as to the pull-quote’s rejoicing that the trend in solar installations is likely to continue, unfortunately not. Or not yet, anyway. Check out Henry Curtis’ article Oops, The Small Print, Gotta Read the Small Print (ililani media, 11/25/2016). If I understand the numbers correctly, installations appear already to have ground to a virtual halt.

Could it be that as usual, Hawaii is just more technically challenged than other places? The IEEE article suggests the opposite. Or is it that we are not good at planning? Perhaps. That has consequences. The solar industry brought us job growth and then expired. Did it have to?

If you don’t have solar panels installed on your roof yet, check out this article while you wait.