Audit faults Hawaii’s Dept. of Taxation in a slick and accessible report format


“
We have serious concerns about DoTAX’s extended delay in promulgating rules. It has been more than ten years since the current form of the film tax credit was enacted. … We also found that the film office’s analysis of film tax credit data does not measure the incentive’s true costs and reports economic impacts that are based on incomplete and overstated data.—Audit of Hawai‘i’s Motion Picture, Digital Media, and Film Production Income Tax Credit
”

Hawaii taxpayers are likely footing the bill for large tax credits given to film producers while the benefits to the state cannot be defined by the Hawaii Film Office or the state Department of Taxation.

Les Kondo, the new Legislative Auditor, has a way with words—that is, using them clearly and effectively for public benefit. As ED of the state Ethics Commission he explained the ethics statutes in plain language to legislators. They didn’t like what they heard, but that’s a long-running theme in our state government. Now at his new post he has found a way to make the formerly dull business of investigating the state’s business accessible.

Now, a good audit report is not generally measured by its form, but rather, by its thoroughness and accuracy, perhaps. Sure. And then, who reads it? We have to depend on news 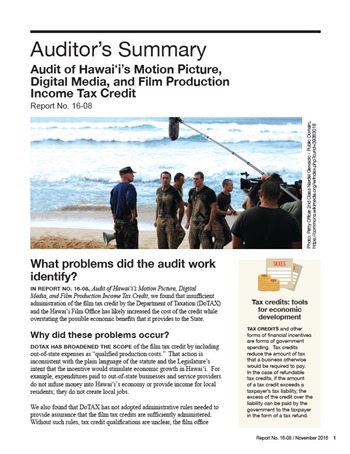 reporters to decipher it and reveal its essence in the couple of paragraphs allowed in our shrinking daily paper.

Click on the image at right and gaze upon the summary of this report. It has a large photo illustration, sub-heads or breakers that provide useful leads to the material, and even sidebars, pull-quotes and illustrations. The full report is equally attractive.

This report resembles a magazine article more than a government audit, and is much more readable and accessible than previous reports. I say kudos, Kondo.

Les Kondo has done the work for the news media. I’m also wondering if ordinary citizens will now find the reports interesting enough to skim through them and learn about the underlying issues of law and governance the reports raise.

Failure to have required administrative rules or to properly administer a program and be ready to account for it to the legislature are not uncommon themes. Reading audit reports is one way to be informed about the efficiency of our government and how well it administers our hard-earned tax money.

Having information accessible to the public means that it is easier to highlight where we need to chase after government administration to get its act straight. The pull-quote at the top of this post provides some suggestions.

First, can you imagine allowing a decade to pass without required administrative rules?  Second, who has been watching this for the past decade? Which parts of government should be held accountable?

Any good story needs some conflict

There is conflict and drama in the report as well. The Auditor and the state Attorney General clash on whether the Use Tax is an out-of-state expense. Note that the AG does not have the last word. In these cases it must be kept in mind that he is the client’s (the agency’s) attorney.

The audit notes that paying tax credits for out-of-state business expenditures is not the intent of the statute. How long has that been going on? Ten years? That’s why the rules are needed. A side question: can tax credits improperly paid be reclaimed?