Law enforcement is for sale in Honolulu. No kidding: it appears that if you pay big bucks, the Honolulu Police Department will enforce a law for you.

Otherwise, not, I assume. If they did it for free, no one would be inclined to pay for it. 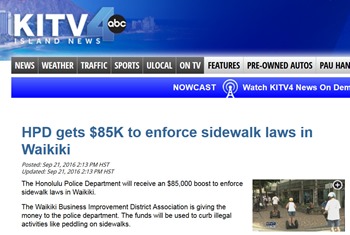 The Honolulu Police Department will receive an $85,000 boost to enforce sidewalk laws in Waikiki.

The Waikiki Business Improvement District Association is giving the money to the police department. The funds will be used to curb illegal activities like peddling on sidewalks.

If peddling on sidewalks is illegal, shouldn’t the HPD be enforcing that law without extra payment? Could the Waikiki Business folks chip in a little more to, for example, make the streets safer by enforcing some traffic laws?

I have just sent the following inquiry to HPD via their web page contact form:

I read that the Waikiki Business Improvement District Association is giving $85,000 to HPD to enforce sidewalk laws in Waikiki. The article, on KITV’s website, did not say how long the enforcement will last. So I have a few questions perhaps you could respond to:

1. The intersection near where I live at Vineyard Blvd. and Nuuanu Ave. gets very congested during the evening rush hour. Often cars on Vineyard rush into the intersection as the traffic light turns yellow, blocking both ongoing traffic and the crosswalk. Pedestrians, especially those on wheelchairs or scooters, have a difficult time crossing or are blocked completely. Yet I have never seen HPD enforcing the traffic laws at that intersection at that time (or actually, at any time). So the possibility of buying enforcement could become one way to ensure pedestrians safe access to those crosswalks.

2. Do you have a rate schedule or price list that you could send me so that a fundraising campaign might be mounted with the goal of having the traffic laws enforced. We would insist on a full menu, that is, including infractions such as failure to stop before turning right on red, intentionally blocking the intersection, blocking the pedestrian crosswalks, failure to obey the crosswalk laws, etc.

3. Since there is a similar situation during the morning rush hour, I would like to know if enforcement can be purchased during specific hours or time periods.

4. Is there an extra charge for enforcement of traffic laws during holidays or on Sunday?

I don’t really expect a reply, but you never know.

For any tourists who might read this: Welcome to Hawaii, where laws can be enforced if your budget is big enough. Be careful crossing the streets because so far no one has paid extra for pedestrian safety that I am aware of.

Of course, what I am getting at is something like: we already pay HPD to enforce the law. Why is this payment necessary, what will it achieve, and shouldn’t it be refused on ethical grounds? Will HPD enforcement be different because they have accepted this payment? If so, where is it written that selective enforcement of laws is at all permitted?

Love your inquiry to HPD! Wish I could draw well enough to do a cartoon on this.


I have the same problem! I might have a picture in my head but I can't draw it.