APRIL 1, 2017 (MEXICO CITY) – Traffic in Arizona towns bordering with Mexico and as far away as the outskirts of Tucson were plagued by random automobile collisions and traffic accidents last week as first-time drug users took to the roads under the influence.

Sporadic gun violence related to road rage fed by drug use was reported.

The chaos was the result of the first retaliatory salvo launched by Mexican drug lords angered over the completion of the first section of President Trump’s Great Wall along the Arizona-Mexico border. Unable to supply markets in the US by means of mules or by hiding drugs in commercial truck cargos, Mexican drug lords switched to one of the most modern technologies—autonomous fixed-wing drones—to preserve their lucrative incomes.

Trump was right—Mexico did pay for the Wall (which was built largely, by the way, by Mexican contract laborers). But they paid China, contracting with Chinese research labs and factories to produce a fleet of flat-winged, autonomous drones capable of carrying cargo largely undetected over the Wall and into the hands of their US agents.

Some have called Trump’s agression and the Mexican response “Wall War I.” 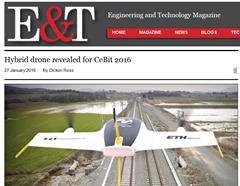 The drones were based on a design exhibited at CeBit 2016 in Hannover, Germany by a Swiss robotics firm.

The motors can propel the UAV to cover up to 60km and can push it to speeds of up to 100km/h. The craft is very light and can carry a small payload of 1.5kg, which is enough for observation and sensing missions or carrying out small deliveries. The first application for Wingtra is expected to be in forest management.

The Mexico-funded, Chinese-engineered clone drones fly farther than the Swiss prototype and are completely autonomous. Each contains a GPS chip identical to the one in a smartphone that enables its route to be completely pre-programmed. The drone takes off, makes its US drug drop, and returns home entirely on its own, without radio contact with a pilot.

So Trump did make Mexico pay, in the end, but they paid China for this new technology.

Unfortunately, countermeasures put in place by Arizona police backfired, resulting in the carnage that focused national and international attention on what has been described as the first test of Trump's foreign policy leadership.


The chaos in Arizona last week started Wednesday when police decided to jam the GPS frequencies used by satellites guiding the drones. When they fired up their jamming transmitters, motorists over a wide area suddenly found their car GPS units going crazy. Meanwhile the fleet of drones, carrying heavy payloads of illegal drugs, dropped out of the sky onto people’s lawns or backyards. Kids hunted fallen drones the way they might search for Easter eggs around the neighborhoods.

At first motorists crashed as they were distracted by poking at their GPS units trying to get them to respond. By far the largest number of fatalities were caused as car and truck drivers followed GPS guidance and turned the wrong way into one-way streets or avenues. Others drove off piers or crashed construction fences.

By the end of that first day a new hazard prevailed. Drones crashing short of their destination gave up their payload of illegal drugs to whomever was nearby. Suddenly there were newly-minted drug users throughout the Tucson suburbs, shooting up with no experience with dosage or the effects that powerful opiates would have on their judgment.

Drug-addled Arizonans packing guns used them on fellow drivers as they dug into their stashes and then took to the roads. Hospital emergency rooms were crowded with overdose victims and injured motorists and passengers.

Although the GPS jamming had ceased, Mexican drug lords began pelting Tucson neighborhoods on Wednesday with small drug drops. Many of the packages included instructions in broken English to encourage experimentation with the deadly contents.

Trump denounces Mexicans as “terrorists as well as rapists”

President Trump’s denunciation of their tactic in a press conference that evening as an act of terrorism only encouraged drug kingpins to escalate their drops the next day. Police in Tucson as well as far-away Yuma reported ongoing drug-related shootings and gun violence related to the random drug drops.

President Trump was said to be closeted with his advisors yesterday in the White House Situation Room. An unauthorized report indicated that he would likely appeal to the Israelies to install a version of their "Iron Dome" missle defense along the Wall to shoot down drones before they could cross into US territory.

No US drug dealers were apprehended because the drones did not reach their destinations, and as they crashed, their programs automatically erased their data.

The death toll in Ariona is still undetermined.

Mexico is planning to exhibit their technology in CeBit 2018 in Germany.