“
Plans by Mayor Kirk Caldwell to create a housing development division appear doomed, and the future of the Hale Mauliola homeless center at Sand Island and related programs could be as well, under the latest draft of the $2.3 billion operating budget that moved out of the City Council Budget Committee on Wednesday.—Star-Advertiser, 4/7/2016
”

The only meaningful thing that Honolulu is doing about its homelessness crisis appears to be to conduct almost nightly raids that antagonize street dwellers but do nothing at all to reduce the annual increase in the number of those living on the streets (see below). Meanwhile the City Council and the Mayor feud and obstruct anything that could even be confused as progress on the issue.

Football season not over in Honolulu 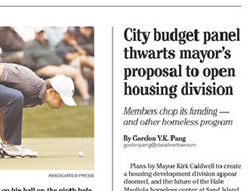 Football season may be officially over, but in Honolulu, children, families and individuals who are homeless are still being treated like footballs in some kind of competiton between Mayor Kirk Caldwell and the City Council. See: City budget panel thwarts mayor’s proposal to open housing division (Star-Advertiser p.1, 4/7/2016).

Yes, while this game goes on, nothing meaningful results that will make even a small dent in the growing homelessness count that demonstrates Honolulu’s inability to even locate the goal posts.

From as far back as 2003, the lack of truly affordable housing has been an identified issue and remains the main barrier to reducing or ending homelessness in Honolulu and in Hawaii. It’s not the only thing that needs a concerted effort to resolve—for example, the lack of a meaningful minimum wage means that individuals and families would not be able to pay the rent even if it were affordable.

How will any of these issues achieve progress when politicians spar for elected office instead of serving the people they supposedly represent (that’s a joke, get it?).

The crisis we find ourselves in will continue to grow until realistic plans, including dedicated resources, specific personnel assignments, an adequate budget and agreed timelines are in place. How will 20,000, 24,000 or 67,000 low-rent homes—whatever the number du jure is—ever be built if the City Council and city administration won’t spend a dime to get off the dime on this?

Meanwhile, the Star-Advertiser editors have correctly challenged the current system of shelters we do have—a system that has flaws that result in large numbers of vacancies going unfilled night after night. See: Ensure that shelters fill beds, 4/6/2016.

There are also time limits that have been set for length of stay at the Sand Island shelter, which, if enforced, would seem to dump residents back onto the streets again after their stay.

Why individuals and families might prefer to live on the streets has been noted in testimony and at various conferences and meetings but does not seem to merit either government action or media attention until now.  In other words, we know the system is broken but we leave it at that while the newspaper reports primarily on establishing “sweeps” if it reports anything at all.

Who is ths “we?” in truth, it is all of us, but in particular, it our wayward Honolulu city government.

The editorial refers to legislative action focused on the shelter issue. But the devil is in the details. Shelters won’t be a preferred choice if complaints persist about fleas, even bedbugs, noise, lack of privacy, robberies, refusals to admit, etc.

Homelessness is complex. The city appears to want the houseless out of sight of tourists and businesses in Waikiki, and having basically achieved that, is not going anyplace fast enough to beat the numbers. People are dropping out of housing and into homelessness. We are getting deeper into the problem, not solving it. Nothing is in place to deal with each part of a complex problem on a scale necessary to achieve meaningful results. That’s what the annual increase in the homeless count reveals.

The City is required by a federal court order to notify the ACLU of Hawaii of its plans for street raids (“sweeps”) the next day. Here are two recent tweets which are typical—that is, these two examples are not cherry-picked: 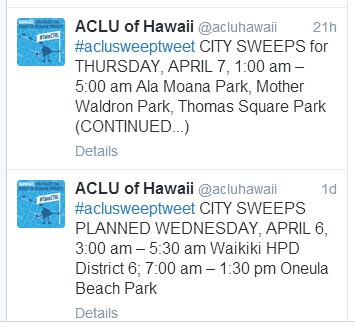 While the majority of those raided will be individual men, they also include families with children.

And we know that the next day they are back, or they simply relocate and set up nearby.

In other words, the raids don’t work. Yes, they may be necessary to keep the streets clean and passable, but why are they scheduled for 1 a.m. or 3 a.m.?

That’s cruelty. Let’s call it for what it is.

To rouse children at 1 a.m. simply disrupts their lives and probably makes it difficult for them to benefit from their education.

US troops were hated in Afghanistan for their night raids. So should the City of Honolulu be condemned, IMHO, for this practice.

At least, the City is no longer able to seize and destroy personal property including schoolbooks, toys, ID, money, medicine, etc. That was the purpose of the ACLU/Alston Hunt lawsuit in the first place—to stop that aspect of cruelty and unconstituional conduct on the part of the City. Interestingly enough, a City official who denied that the City was destroying these items has not yet, to my knowledged, been discplined either by the court or anyone else and remains on his job. See: ACLU files new motion to stop Honolulu’s illegal destruction of property during sweeps of homeless camps (11/4/2015).

If you doubt that the City would act cruelly towards its citizens living on the streets, here’s a snip from that article, from the deposition of a former worker who was forced to destroy personal property at the order of her supervisors:

Q. To this day does this enforcement action make you sad?
A. Yes.
Q. Why?
A. There were quite a bit of children, their toys and stuff, and it just wasn't a good day.
Q. Did you throw kids' toys away?
A. Well, if the supervisor said so, yes.
Q. So do you remember, did you throw kids' toys away?
A. I remember some, yeah.
Q. And what did you think about that?
A. I didn't like it.
Q. Why not?
A. They're children.
Q. You felt like they should be allowed to keep their toys?
A. Yeah.
[***]
Q. What did you want to do instead?
A. Wanted to give it to them.
Q. But your supervisor said no?
A. It's his decision, so…
…
A. They could have gave it to the kids, they could have allowed them to take it.
Q. Were the kids asking to take their toys?
A. They were crying

So now the Mayor can’t destroy kid’s toys, but he can still disrupt their lives in the dead of the night as many times each week as he likes.

And his cruel actions solve nothing.