Should Hawaii have a “mosquito czar” to fend off Zika and protect tourism?

The Governor has issued an emergency proclamation to free up funding so that the Department of Health can hire personnel to deal with the ongoing Dengue outbreak and the possibility of the Zika virus arriving in Hawaii. The virus has already arrived in American Samoa, Fiji, New Caledonia and Samoa.

Releasing genetically-modified male mosquitoes is proving to be a safe and effective method of insect control.

The males don’t bite, but they do mate with females, which are then rendered incapable of producing viable larvae. Populations of mosquitoes can be reduced drastically without the use of broadspectrum insecticides that are harmful to the environment and to human health. Additionally, as has been shown in malaria-eradication efforts, insects can and do develop resistance to pesticides.

Genetically-modified mosquitoes are already being released in Brazil. This Google search will bring up a number of articles on their progress.

Instead of producing glow-in-the-dark mice, the University of Hawaii could be running or supervising a program to mass-produce these little critters, with the objective of safely reducing the Aedes population by 90% or more. The program would have to be ongoing and consistent to keep down the population.

Instead of waiting for Zika to hit, with all of the health and economic consequences it would bring, why not evaluate the potential of such a program to prevent an outbreak in the first place?

If we can’t produce our own in sufficient quantity, is it possible to import GM male mosquitoes from abroad?

The way these mosquitos are produced is quite interesting:

In the wild, the genetic modification kills the offspring of the released males. If enough sterile males were released, the wild-type A. aegypti population would eventually crash.

But how can these mosquitos be bred if the offspring die? It turns out that if they are fed a tetracycline supplement, the larvae live. So in the laboratory they are fed this supplementand so they proliferate, but the bugs can’t get that when they are released. When they are let loose, it’s as though Cupid is shooting poisoned arrows—they mate with female mosquitoes and that cuts off the family tree.

The technique is not new or untested:

In November 2010, theWellcome Trust announced that the Malaysian government had approved the release of genetically modified sterile male A. aegypti mosquitoes to control dengue, a disease for which drugs or vaccines are not available and bed nets are largely ineffective. Oxitec, the British biotechnology company that developed the transgenic mosquitoes, had already conducted a trial in the Cayman Islands in 2009/2010. Oxitec’s “sterile” male mosquitoes pass a lethal genetic element to their
offspring, making them unviable. This self-limited strategy is regarded as relatively safe as it is a new form of the sterile insect technique, commonly used in agriculture, with the exception that in this technique insects are rendered sterile by radiation instead of genetic manipulation.

So far, media reports have not mentioned whether this technique is being considered to fend off a Zika epidemic in Hawaii. If it is not under consideration, it should be.

Is the state doing enough to protect its citizens and prevent a potential tourist boycott? How do we know?

The Zika virus appears to be associated with a rash of microcephaly cases—which has terrified families in Brazil and elsewhere. Compared to dengue fever, the symptoms of Zika in those infected are more benign, but the risk to newborns promises to visit lifelong tragedy on families. This fear would be enough to apply the brakes to Hawaii’s current tourism boom.

Believe it. Following the Governor’s proclamation, articles like this have been posted on the Web:

The headline is unwarranted, but there it is. When (not if) Zika arrives on the Big Island, there will be plenty more like it.

Google reveals several more articles mentioning Hawaii in the context of a potential Zika outbreak. For example this, from the Daily Mail, warning that “people in Hawaii … should watch out:” 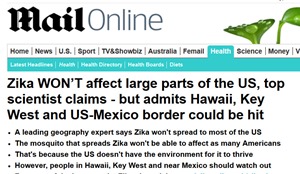 The Southern United States is also vulnerable because the Aedes aegypti mosquito is common there, but a Zika epidemic may be far less likely. Why? Because the mosquito bites during the daytime, and while it is hunting for blood outside, most people are indoors in air conditioned offices or homes. Or so the theory goes. But in Hawaii, windows are open and air conditioning is far less common. We are also not yet good enough at mosquito control—as the dengue outbreak demonstrates.

We could use a “mosquito czar” or a “chief technologist”

I’ve promoted the idea of a “chief technologist” for the state because we appear to be backward in so many ways. GE had one when I worked for them. The idea was to make sure that the company didn’t miss anything that they should know about to remain competitive. In Hawaii, a chief technologist could review our state agency programs and point out better ways for the state to conduct its business.

Of course, this isn’t going to happen.

So at least, how about a “mosquito czar?” Our fight against dengue so far has been a losing battle, so the mosquitos are ready and waiting for Zika to arrive. Meanwhile, other areas of the world that have suffered dengue outbreaks or are now battling Zika have put in place far more comprehensive programs. It seems to take a multi-pronged approach to effectively control the mosquito.

We don’t have to reinvent a mosquito-eradication program, it’s been done before. Singapore, for example, while still battling dengue, has had success that is worth emulating. Not that their efforts have been completely effective. The mosquito is a tough foe.

One promising area that could be tapped here is the use of genetically modified male mosquitos to mate with females and cut down the population. More on this is in the box at right.

If a Zika outbreak is to be prevented here, it will only happen if the mosquito population is reduced drastically.

Low confidence in the Department of Health

Sad to say, another argument for a mosquito czar is that over the years the DOH has been unable to fulfill its core functions reliably. Whether it is providing needed mental health services, posting inspection reports, or controlling rats (as examples) it has too often taken outside pressure to get results from this agency.

Rats (the most analgous DOH challenge to mosquito control) are far larger than mosquitos and arguably easier to control, but in the face of DOH’s failure to deal with the rats in a large Chinatown market several years ago, there was nothing to do but post that video, which was then picked up by TV stations, forcing DOH to deal with the situation.

We have had emergency proclamations to fight homelessness, but the follow-through has not been adequate in view of the scale of the problem. So now there is a proclamation in reaction to the dengue outbreak on the Big Island, but in addition to being late, is it also too little?

Singapore’s National Environment Agency has led a multi-pronged effort to battle the mosquito in that city-state. Its agents have the authority to enter private property to search for and eliminate standing water and to take other mosquito-eradication measures. For example, inspectors search roof gutters and both interior and exterior spaces for standing water. It seems that the mosquito has become well-adapted to human habitation and can breed even in tiny pools of water in the dark cabinet underneath a leaking kitchen sink.

In addition to an army of inspectors (which Google reveals is or was around 500 workers), the NEA runs a number of public education programs advising people to (for example), change water in vases and bowls on alternate days, remove water from flower pot plates on alternate days and turn over all water storage containers. I understand that there are fines if households are discovered to be lax in eliminating standing water completely.

While Hawaii cannot perhaps be as intrusive in its war against the mosquitoes, there is no doubt much that could be done to engage people through intensive public education, using media and methods that reach the majority of the population. Send info home with school kids. Buy commercial time on TV and radio. Use social media. And so forth.

If inspections cannot be mandatory, at least offer Singapore-style inspections as an option to homeowners. As a reward, they might receive a green placard to post on the property demonstrating success in becoming a “mosquito free zone.” Or something like that.

Aside from private property, construction equipment often leaves ditches in the dirt where water collects. So commercial practices need policing as 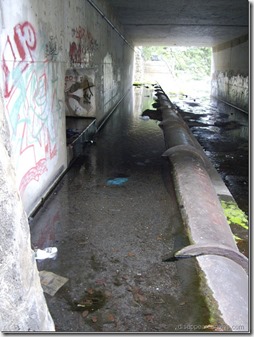 And often public works, when poorly executed, can create vast mosquito-breeding areas. Here’s a photo of stagnant water under School Street on Oahu. Mosquito larvae were plainly visible at the time I visited the spot. (click image for larger)
Don’t settle for proclamations

Issuing proclamations by itself does not achieve anything, of course. Particularly residents of the Big Island might consider watchdogging the state’s efforts (or lack thereof) just for the sake of their own health.