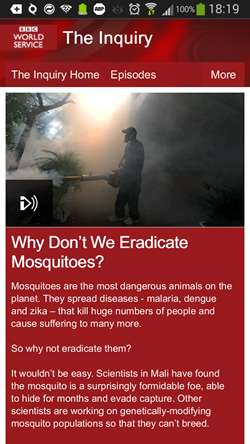 had been researching the progress of mosquito eradication via release of genetically modified male Aedes aegypti (see earlier article) when this podcast from the BBC World Service dropped into my podcatcher app. Did you ever have the experience of wishing for something and it is suddenly delivered to you?

Here is a snip from the show notes:

Why Don’t We Eradicate Mosquitoes?

Mosquitoes are the most dangerous animals on the planet. They spread diseases - malaria, dengue and zika – that kill huge numbers of people and cause suffering to many more.

So why not eradicate them?

It wouldn’t be easy. Scientists in Mali have found the mosquito is a surprisingly formidable foe, able to hide for months and evade capture. Other scientists are working on genetically-modifying mosquito populations so that they can’t breed.

But could releasing these re-modelled mosquitoes have unintended consequences? And might we accidentally destroy ecosystems by removing mosquitoes altogether? It turns out this tiny creature presents us with huge practical and ethical problems.

The BBC interviews four experts and includes is a good explanation of how the mosquito may be fought using genetic modification.

A takaway from listening to the program is that while GM methods face challenges when applied in a continent as large as Africa, there is no such issue on an island isolated in middle of the Pacific Ocean. In fact, conducting research on eradication on the Big Island could conceivably have valuable results that could be applied elsewhere. It would be as though researchers have a large but contained laboratory in which to guage the effectiveness of eradication options.

The mosquitoes may never be 100% eradicated, but that’s not necessary. Reduction of (say) 90% would appear to be enough to stop epidemics of both Zika and dengue. Going the GM route would be effective whereas chasing down every puddle of standing water on the island would not only be near impossible but would require perpetual spraying and the harmful effects associated with spreading poison everywhere.

Another conclusion is that eradication of just the A. aegypti mosquito, leaving the others untouched, would appear to present no ecological or ethical issues. That particular mosquito feeds exclusively on humans. While birds, bats and perhaps other animals feed on mosquitoes, they still have quite a smorgasbord to choose from without that one species.

In fact, the ecosystem is disturbed almost not at all, as compared to intensive spraying with harmful chemicals.

Most of my questions were answered in this one, short podcast. It should be required listening for state legislators and Department of Health management.

You may listen to the podcast at the link above, or try the audio player below. If it doesn’t appear in your browser or doesn’t work, click the download link and it should play.

It isn’t necessary to know how an internal combustion engine works in order to drive a car, and I don’t need to know exactly how GM male mosquitoes are made beyond the research papers cited in my earlier article and the explanations in the BBC podcast.

What is left now is to get the discussion going in Hawaii.

It would be good if we could eradicate this mosquito before Zika arrives here. What’s at risk is the health of both babies who could contract microcephaly and the potential impact on the tourism economy. We already have an active dengue outbreak that could be stopped in its tracks with GM technology promptly applied.

Let’s check this out, and the sooner the better.