Each session it happens. Certain legislators hold fundraisers outside of their districts but close to town, so that they can rake in lobbyist and special interest campaign contributions—while the legislature is still in session and matters may come before them that the lobbyists are paid to advance.

This year a group of House members have jointly sponsored a fundraiser during the session, and the majority represent out-of-town districts (see list, below).

This one fundraiser presents both issues, which are separate but each troubling on its own. I treat both issues together because they so commonly occur together.

Since special interests are not philanthropies—they expect a return on their investments—we have the ethically dubious situation wherein constituents are sidelined and deprived of their representation while doors and campaign coffers are opened wide for lobbyist access.

Since Neighbor Island constituents are unlikely to attend this fundraiser, the motivation of these legislators is clear.  Lawmakers who hold fundraisers out of shouting range of their constituents are clearly listening to other voices.

Here’s a list of legislators who will be holding a joint fundraiser across the street from the State Capitol on February 23, along with the districts they represent. Is your “representative” among them? Do you plan to attend?

Here’s a group mug shot selfie from their announcement mailer: 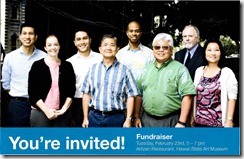 There oughta be a law—a rant

Legislators, like the rest of us, are not bound by either ethics or morality, in the common usage of those terms. The state has an “ethics code” that is written in statute and interpreted and sometimes enforced by the Ethics Commission. As we have noted from time to time, budget and personnel constraints (ultimately imposed on the Commission by the same legislators they are supposed to watchdog) make it impossible to keep up.

On top of squeezing the Ethics Commission, the House in particular has taken direct aim at their ability to reign in violations. In recent memory the Speaker of the House has directly sought removal of the Executive Director when the Commission has simply acted to fulfill its mandated function with a couple of high-profile opinions.

So it’s no surprise that we find House committee chairs demanding (and getting) approvals to scrap the 48-hour notice rules for hearings or that House legislators don’t mind holding these fundraisers out-of-district, which is not in violation of any statute.

The Force (of ethics) is simply not strong with these folks.

What is needed, under the circumstances, is the passage of a law that would prohibit these fundraisers during session. That would move the question of ethics-with-a-small “e” to Ethics with a large and enforceable “E.”

As to asking for contributions outside of a district, that’s likely not conduct that state law can deal with, given the US Supreme Court’s recognition of money as a form of free speech.

What is ethical in politics?

Do politicians have special license to discard aspects of ethics or even morality that may be valued by ordinary citizens?

Machiavelli says, 'a man who wishes to profess goodness at all times will come to ruin among so many who are not so good. Hence it is necessary for a prince who wishes to maintain his position to learn how not to be good, and to use this knowledge or not to use it according to necessity'—from The Prince, quoted in The Ethics Challenge in Public Service, 2nd Ed.,  Carol W. Lewis, Stuart C. Gilman, Jossey-Bass, 2005

That was a 16th-century view that accurately describes the situation our modern-day politicians may face in deciding whether to “not be good” and hold fundraisers out of their district and during the legislative session. They feel, with some justification, that if they don’t do this, their opponents now or in the future could dethrone them.

Harsh words? It is a question of our time at all levels of government whether pandering to corporations or special interests can co-exist with the fundamental responsibility of an officeholder to represent the electorate.

A Disappeared News op-ed by Dr. Kioni Dudley focused sharply on exactly this issue. His research revealed that certain Honolulu City Council members are so indebted to construction and Rail interests that up to 91% (in one case) of the lawmaker’s campaign contributions during a certain period came from those interests.

Ethics in politics is a complex issue, especially in a world where “keeping us safe” motivates national leaders to violate even basic human rights in the name of Machiavelli’s “necessity.” At a local level the challenges are simpler, and the public’s ability to influence the conduct of its representatives is perhaps greater.

So it is up to us to one day put an end to conduct we object to. If we tolerate it, we are condoning it.