“
Despite computer-controlled stabilizers and other features designed to smooth the 349-foot-long Alakai's ride, rough winter seas have forced the Superferry to cancel trips 11 days in less than two months. That's far more than the 2% cancellation rate officials had planned, and roiling conditions have helped earn the vessel a nickname: "the barf barge."—USA Today, 2/1/2008
”

According to a Star-Advertiser story posted last week (Ige floats proposal to bring back ferry service, 2/4/2016) State Department of Transportation Director Ford Fuchigami and Senate Transportation and Energy Committee Chairwoman Lorraine Inouye plan to travel to Washington, DC to research the availability of the two ferries that originally were part of the failed Hawaii Superferry venture.

First of all, this is 2016, and Sen. Inouye probably knows how to use the telephone, the Internet and email, so Disappeared News wonders why taxpayer money should be spent on an expensive trip. She could use Google to find many reasons why we should not return the “Barf Barge” to Hawaii.

Before stepping onto a plane they might reflect first on why they would want to have these two ships back in Hawaii in the first place. The Superferry failed for several reasons—one was operating cost, and the other was unsuitability of their design for the Hawaii inter-island route.

Although the media generally refused to cover the problem, seasickness was enough of an issue that it would be far better to start looking for a more suitable solution that wouldn’t repeat the Superferry’s costly mistakes.

I wrote about the costs taxpayers would have to bear in this article.

In a nutshell, while the military may not care how much fuel it takes to move those ships with their huge engines, we should certainly look at that first (to repeat: Sen. Inouye doesn’t need to go to Washington DC to do that research).

As to the suitability for Hawaiian waters, cancellations due to high seas were damaging (see the USA Today article) and a deck awash with vomit is something tourists noticed, even if the local media refused to cover the issue. An exception was this story that did appear in the Honolulu Advertiser: 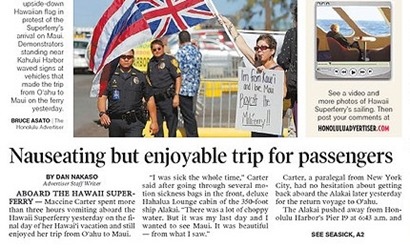 One passenger in the Hahalua Lounge was in so much misery that he had to be carried and dragged off to a first-aid area to lie down, Toro said.
…
Even three Superferry protesters who paid their way as passengers got sick on the cruise.

Hale Mawae of Anahola, Kaua'i, couldn't make his way to the bathroom in time and vomited all over the Superferry's wooden floor passageway. His cruisemates, Katy Rose and Andrea Brower, also of Kaua'i, vomited as well.

"I definitely used some of those bags," Rose said. Added Brower, "I don't get seasick and I got sick."

The story noted that the sea conditions were not unusual, but were typical for that time of year.

And this one, from The Garden Island:

“It was torture,” said O‘ahu resident Nola Watasa, who was traveling to Maui with her son, Colby, and husband, Dave, for a varsity wrestling tournament. “I’m glad it’s over.”

She and others riding the $85 million jet-propelled vessel — such as Clayton Fernandez, an O‘ahu resident visiting Maui for the first time — filled up the “barf bags” that Hawaii Superferry staff handed out early on in the three-hour voyage.

Workers scrubbed the carpet and wiped down the faux leather seats for those passengers who were unable to find a paper sack or make it to the bathroom in time.

Here’s a video posted by George Peabody on YouTube:

So again, Sen. Inouye and Director Ford Fuchigami: Don’t waste our money with an expensive and unneeded trip to Washington. Try Googling instead.

Tell you what: I’ll email this article to you.