Return of Superferry vessels would be an advertising windfall for newspapers, a boon to bloggers, and a disaster for taxpayers


“
Gov. David Ige’s administration is moving ahead with a proposal to revive interisland ferry service in Hawaii, a potentially controversial effort that could even involve the same catamaran vessels that were deployed in the ill-fated “Superferry” initiative that shut down in 2009.—Star-Advertiser, 2/4/2016
” 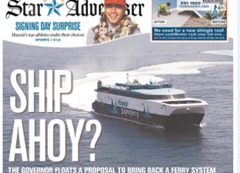 The media seldom spoke ill of the late Hawaii Superferry—considering the advertising revenue the ferry service forked over, that’s no surprise.

I remember chuckling when a Google search for an article in the Star-Bulletin displayed the article in the middle with a Superferry ad to the left and another to the right.

It’s amusing that today’s Star-Advertiser front page article leads with a report that the same vessels that proved so unsatisfactory the first time around are under consideration once again. Those vessels both cost too much and did not provide a satisfactory “ride”. The article notes that they are not in use now. Why? There might be a very good reason. Or two. Or more.

The Hawaii Superferry's operating agreement with the state required a minimum of $191,667 in monthly payments during the first three years of service for various fees including dockage, port entry, passengers and vehicles. The company paid the full amount from the time it started service in December 2007 until July 2008, and then payments gradually declined until March 2009, when it stopped paying altogether.
…
Neither the company nor the state had disclosed that the ferry service couldn't make its required payments until the the DOT released the Superferry's payment records at the AP's request.

Essentially, the state continued to hide the fact that the Superferry was a failing business.

The link to Niesse’s story in the Honolulu Advertiser has been taken down, but there is an equivalent AP story here. That article indicates that the state pulled the wool over taxpayer’s eyes by keeping the Hawaii Superferry’s losses a secret:

Neither the company nor the state had disclosed that the ferry service couldn't make its required payments until the the DOT released the Superferry's payment records at the AP's request.

During the first month the Superferry shorted the state, company President Tom Fargo went so far as to proclaim "business is good," with July showing a 40 percent increase in passenger traffic on the vessel compared to the previous month.

The state demanded payment in at least four letters to the Superferry, and legal action was threatened in two of the letters, according to the documents reviewed by the AP.

The state never followed through with lawsuits to collect money owed until after the ferry's bankruptcy.

"They were having financial difficulties already, and that's why they were heading toward bankruptcy," said state Transportation Director Brennan Morioka.

Ferry-related bills in the Hawaii Legislature

Brad Parsons has noted in an email the following bills that are still alive, related to an interisland ferry system:

By the best outside estimates, the original Superferry did not turn a profit or even break even, except possibly for Golden Week in May, when Japanese tourism hits a max. Why? The choice of vessel certainly drove operating costs.

Those huge engines needed to be fed, whether or not the ferry carried a sufficient number of passengers to break even.

Our commercial media, coveting the Superferry's generous advertising budget, consistently failed to dig into the details of its operational costs and eventual bankruptcy.

The press reported that the ferry went out of business because of the Hawaii Supreme Court ruling that an EIS should have been prepared. But the bankruptcy actually ended it, and that demonstrated that the service could not cover costs or make required payments. Continuing to cite only the Supreme Court decision for the ferry failure would be to mislead readers and lawmakers who seem to be informed principally by what they read in the paper.

Should our state government find a way to bring back the same two fuel-guzzling vessels, the operating cost will become an unacceptable burden on taxpayers.

As I wrote in an earlier article, it seems that Hawaii is the state that can’t plan. Saying that the state may try to bring back the same ships without knowing the operating cost echoes the City and County of Honolulu’s construction of a hugely expensive rail line without planning for and disclosing the operating costs.

We should also recall the poor planning that resulted in Mufi Hannemann’s commuter service called “TheBoat:”

TheBoat, Honolulu's commuter ferry from Kalaeloa to Aloha Tower, gives West O'ahu residents an oceangoing alternative to increasingly clogged highways, for no more than $4 per round- trip ticket.

The cost of carrying each passenger on TheBoat is about 62 times more than the cost of an average trip on TheBus. It is also significantly more expensive than comparable Mainland ferry services.

There is more to say about the poor performance of the original ships, but this is enough for now.


HNN posted this story, so I commented that it would not be wise to try the ferry again, while citing the past challenges and the cost. I was bashed so badly that I deleted the entire thread. I rest my case that anyone who has documentation on a subject that challenges the unresearched perspective of the public is in for a slap.