“
The media suffer from bad, unprofessional journalism, reporting only one side of what goes on, only the negative, the violence, and only what elite actors in elite countries do. Plus some “leaders” in some other countries. –Johan Galtung
”

I expect to find uninformed and very often right-wing junk in the Star-Advertiser’s letters section, because they’ve made that part of the paper a fact-free zone. There’s nothing saying that they have to print letters that are blatantly inflammatory or factually wrong—unless they choose to do so.

But on the news side, we expect better. Unfortunately, the paper can fail to deliver, as it did today.

Reporter Kevin Dayton started and ended his story Some not so eager for Syrian refugees to come to the isles by featuring the opinions of a person clearly uninformed about the risks of admitting Syrian refugees to Hawaii (which is unlikely to happen in any case).

Myers is retired from the Los Angeles County Sheriff’s Department, and said he is licensed to carry a concealed firearm. He hasn’t packed a gun in the 25 years he has lived in Hawaii, but now he wonders whether someday he might need to be armed.

The fear mongering article mentions Rep. Tulsi Gabbard’s vote for the SAFE act which would place almost impossible to meet requirements on the government 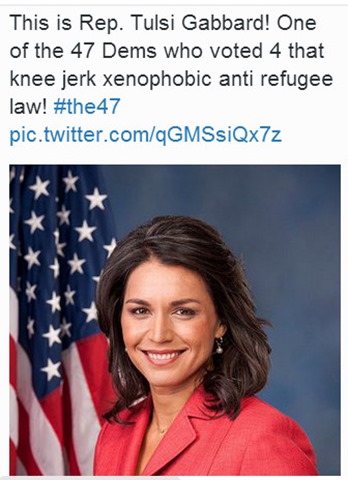 to approve each and every Syrian refugee individually by both the head of the FBI and the director of national intelligence. Gabbard has been highly praised by Republicans, many Democrats and others for her vote, but she has also garnered her share of criticism (example tweet at the right).

What is left out is context that would counter the views of that ex-sheriff that the reporter used to set the tone of his article. In fact, Syrian refugees are vigorously vetted and the number of them who have been involved in any terrorist activities is vanishingly small: one in roughly 261,000 according to a segment worth watching from John Oliver's last program on HBO this year (see below). And none of that was terrorism in this country.

Oliver explained the math and pointed out:

"This is the most rigorous vetting anyone has to face before entering this country," he said. "No terrorist in their right mind would choose this path when the visa process requires far less effort. But nevertheless, the House still voted on Thursday to add a few more steps."

This is the part that many reporters omit, and of course it is crucial to an informed opinion about the risks of immigration.

John Oliver derived the mathematics of this issue in his November 22, 2015 segment. He has not yet posted it on YouTube, but I found an almost complete video that is worth watching. When he posts the official version I will replace this link. 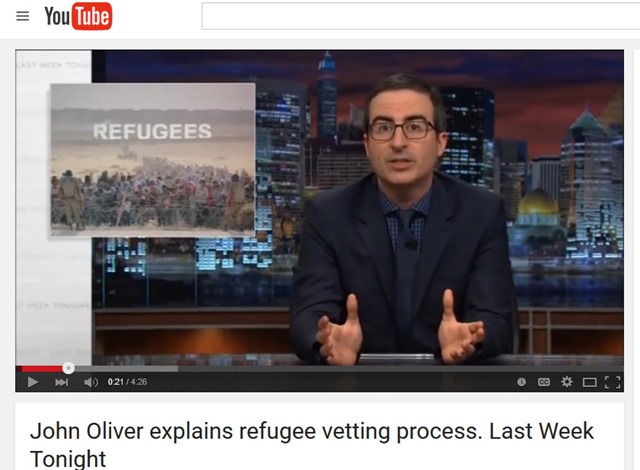 Criticism of Governor Ige’s welcoming statement has also hinged on Hawaii’s inability to provide housing for its large homeless population. This is also at least mildly xenophobic. Not all refugees are without skills or training that could be of use in a new country. Some of them have trades, advanced degrees, or practice professions that may be in demand here. It is not necessarily true that they would end up adding to Hawaii’s growing houseless population. I find it embarrassing that this is the best “rational” excuse that has been offered.

Finally, in my experience, we are a generous people in Hawaii. If anyone wishes to welcome a refugee family into their home, as has been widely the 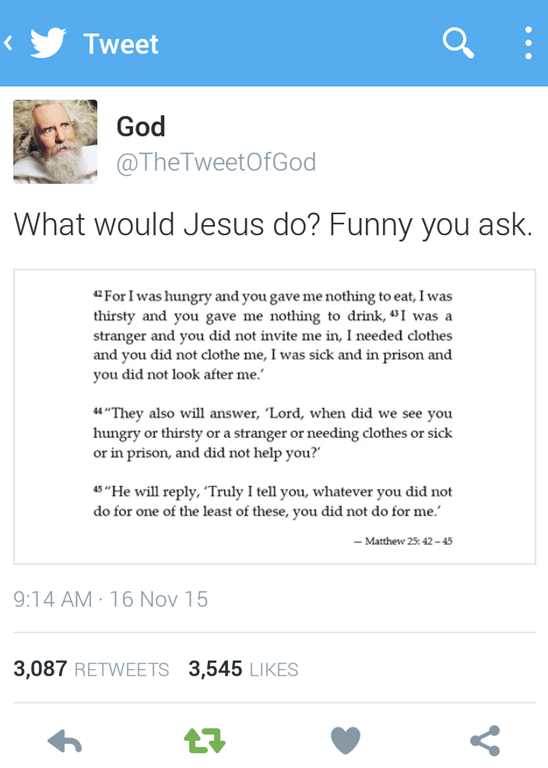 case in Europe, they should have the opportunity to follow their convictions. It may help if our newspaper provided at least a balanced view of critical issues such as this one.