Breaking: ACLU lawsuit against unconstitutional seizures of property during homeless sweeps to go to mediation

This record was filed just minutes ago in federal court in Honolulu (snip):

Prior to the mediation the parties will submit confidential statements to Judge Seabright.

The case Martin v. City and County of Honolulu was brought by ACLU Hawaii and Alston Hunt Floyd & Ing in response to destruction of personal property during the City’s numerous sweeps of homeless encampments.


Related: the ACLU has been posting the location of planned sweeps on Twitter. Check the hashtag #aclusweeptweet for the latest information. If you would like to try your hand at citizen journalism, take you smartphone over to the sweep sites and take some videos of the City crew’s behavior in the face of the constitutional challenge.

The City workers must place personal property in bins or otherwise store it without destroying it, and later make the items available for recovery if claimed. That’s not only the court order, it is the law as passed by the City Council, although it has been flagrantly misused.

Here is the tweet warning of today’s planned sweeps: 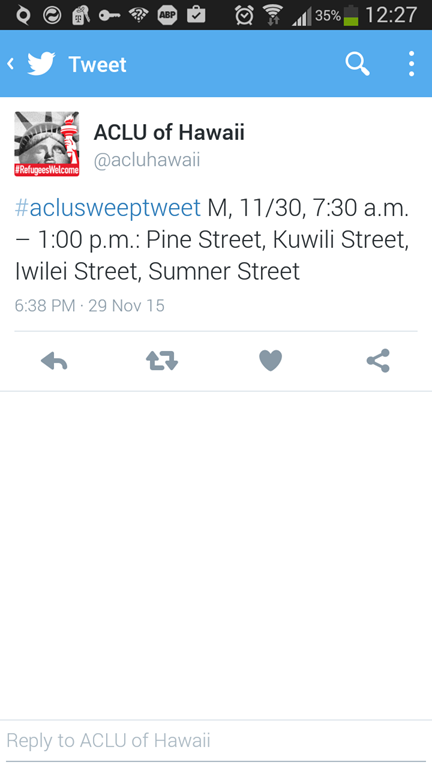