“
Now, they move to the second stage, which is to take revenge. And that’s why we see this eight people, eight people, a very organized cell, to attack six positions, six places in Paris in the same time, the same night. It means they are lethal, they are dangerous. And this kind—these attacks is one of four attacks which took place by the Islamic State. The first thing was in Tunisia in a resort, where about 40 people were killed. And then, you know, this—the downing of the Russian tourism aircraft—224 people were killed—to destroy the tourism industry in Egypt and in Tunisia. Now they are attacking the tourism or the jewel of the crown of Europe, which is Paris, where $70 billion, actually, the revenue of the tourism industry for France. So they know what they are doing.--Middle East journalist Abdel Bari Atwan in Democracy Now interview
” 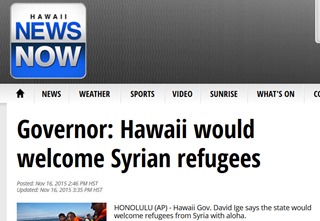 If there is a threat to Hawaii, it is not from refugees fleeing oppression.

Which is not to say that there is no threat.

The Republican governors’ statements that they refuse to settle refugees are largely grandstanding for their base anyway, since the federal government controls immigration and immigration policy. The worst they could do would be to withhold benefits at least until the courts catch up to them.

The refugees are fleeing the same tyranny and terror that has played out most recently in the horrific Paris attacks. Refugees are not the problem, they are victims. At a deeper level, the US bears considerable responsibility for the present state of affairs in the Mid East. So Ige’s statement is both fair and compassionate.

ISIS changing strategy toward revenge is the threat

Today’s edition of Democracy Now is well worth watching. See the video or read the transcript here.

The segment, after the headlines is the first of a two-part interview with Middle East journalist Abdel Bari Atwan that explains a great deal about ISIS and their current strength and strategies—an explanation that does not appear in the mainstream media. For one thing, the MSM seems not to want to admit that ISIS is in fact a state, with an army, police, borders, oil sales, etc. To describe them as an al-Qaeda on steroids is to mislead readers.

If the observations in the interview are correct, ISIS has moved to a strategy of targeting tourism in the West. If there is a threat to Hawaii from ISIS it could be because our economy is so heavily based on tourism that we might be in terrorists’ crosshairs.

Today’s segment is important—please click over to view it. I’ll close with just one snip, to illustrate the description of ISIS that can rarely be found elsewhere:

And you cannot actually avoid—you don’t defeat it by saying, "It is Daesh, it is not Islamic State." It is Islamic, and it is a state. When I say Islamic, they are adopting the worst interpretation of Islam, Wahhabism, which was originated in Najd in Saudi Arabia. And it is, you know, a state, because it has all the terminology, all actually the description of a state. They have an army, they have a police, they have an administration, they have a cabinet, they have their own currency, they have their own flag. They have 9 million or 10 million carrying their citizenship, whatever. They have their own border until now. And they are dealing with the neighboring countries. They are selling oil to Kurdistan, north of Iraq. They are selling oil to Turkey. They are selling oil even to Europe. So, people would say, "No, no, they are not a state." OK, good luck to you. But it is a state, and it is Islamic, whether we like it or not. You know, this is not a good beginning, actually. If you want to understand this state or this phenomena, this terrorist organization, this is not a good beginning. We have, actually, to be truthful. We have to be truthful to ourselves. We have to understand this phenomena, terrorism—…—terrorist phenomena.

Let me add that it would pay for us here in Hawaii to understand their strategy, because our entire economy may depend on it.

Update: for those still critical of Gov. Ige’s welcoming of Syrian refugees, Gene Park observed in a tweet: 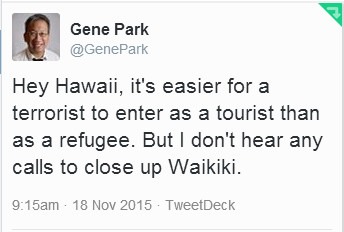 “Hey Hawaii, it's easier for a terrorist to enter as a tourist than as a refugee. But I don't hear any calls to close up Waikiki.”