“
During sweeps of Kaka'ako homeless persons, the City seized and disposed of over 134,000 pounds of property while storing for retrieval only 8 small containers of property. The City has admitted that it has allocated only about 1,000 square feet of space to store all property taken under the Ordinances – clearly insufficient for the personal possessions of the hundreds of persons and families displaced by sweeps.—from ACLU press release 11/19/2015
” 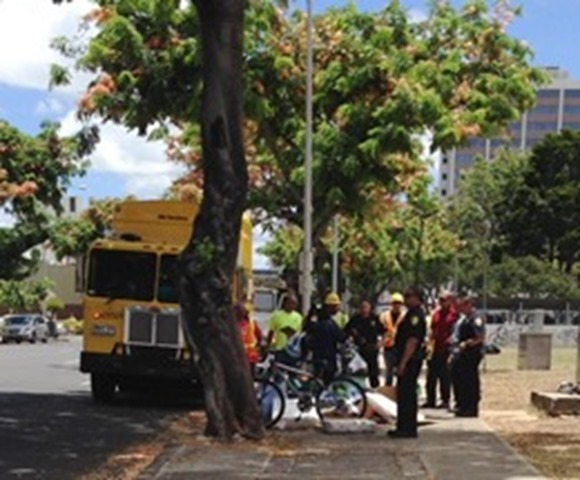 The garbage trucks were ubiquitous at every sweep. At Thomas Square, the City even brought front-loaders which it parked on the sidewalk near the tents, ready to scoop up personal belongings and dump them into the compactor to be destroyed.

Yet in the case brought against the City by ACLU and Alston Hunt Floyd & Ing, the City lied and testified that it did not destroy personal property. See: ACLU files new motion to stop Honolulu’s illegal destruction of property during sweeps of homeless camps (11/4/2015). 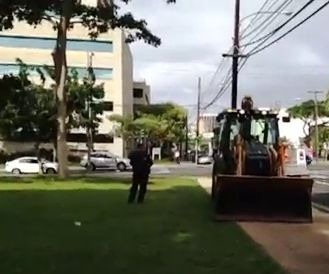 Today the ACLU announced that a settlement resulting in a court order had been reached. The order is attached below, or you can download a copy of the pdf file.

The court order does not prohibit the City from performing sweeps, but it will seriously cramp their style because they have insufficient place to store the personal property of anything beyond a small-scale sweep.

It’s one thing to throw tents and other property into garbage trucks and cart it away and another to provide storage space and make it possible for people to easily retrieve their property. As the City applied its ordinances, even the little property that it did store ended up disposed of because of the near-impossibility of retrieval. See the snip of the court order for a partial list of property that the City must now store—which, I must add, it should have been storing all along—countless people have been severely impacted by the City’s illegal destruction of their property.

So until the City provides storage space and implements a streamlined procedure for reclaiming property, most likely it cannot continue its sweeps.

If the City violates the court order, it could be held in contempt of court.

From the ACLU press release:

Kristin Holland, Of Counsel with Alston Hunt Floyd & Ing said: “We are glad that this agreement will require the City to follow the law while the case moves forward and as Hawaii’s lawmakers find ways to meaningfully address the crisis of homelessness. This case is not about people's ‘right’ to live on sidewalks and no one is seeking to force the City to store trash or hazardous goods – there is no such right or obligation. It is about illegally taking and destroying personal possessions, the constitutional right of everyone to reclaim property seized by the government, and the right to challenge that seizure. These rights apply to everyone equally, rich or poor.”

Here’s a snip from the court order. To read more, view or download the document below.

Except as set forth below, Defendant City and County of Honolulu and anyone acting on its behalf (“City”) shall not immediately dispose of any property that would constitute a “sidewalk-nuisance” pursuant to the Sidewalk Nuisance Ordinance (“SNO”), Revised Ordinances of Honolulu (“ROH”) Section 29-16.2, or that would constitute “Personal Property” pursuant to the Stored Property Ordinance (“SPO”), ROH Section 29-19.2. The property to which this stipulation applies includes, but is not limited to, tents, tarps, children's toys, suitcases, laundry baskets, shelves/crates, backpacks, baby strollers/cribs, air compressors, recreational items like surfboards, bicycles, clothing, bedding, coolers, household goods, and furniture. Any property that is impounded must be stored for no less than 30 days pursuant to the SNO or SPO.