“
We reject the idea that constantly having one’s few belongings taken has anything to do with compassion.—Civil Beat editorial 11/19/2015
”

State Rep. Jo Jordan, whose district includes Waianae, has her eye on the site for a project that she says would have “educational components.” But she won’t give further details or say whose project it is. Meanwhile, though, she’d like to find ways to get the residents of The Harbor to leave of their own accord.

See Civil Beat’s website for more on The Harbor and what it is that Rep. Jordan wants to destroy.

There is some talk about setting up temporary camps, temporary shelters, or even trailer camps to accommodate some of Honolulu’s rapidly growing homeless population. So here you have a community that has already taken steps to provide some quality shelter for themselves and are apparently maintaining their environment in good condition. This is not a tent city such as was set up in Kakaako by people desperate to escape Mayor Kirk Caldwell’s perverse application of “compassion.”

Caldwell’s (and apparently Jordan’s) version of “compassion” may soon be debated before a federal judge. The lawsuit brought by the ACLU of Hawaii and Alston Hunt Floyd & Ing is just completing a series of status conferences that will determine when their motion for a restraining order against the City’s confiscation of personal property will be heard. The judge will decide on constitutional grounds, of course, but as to the morality of “compassionate disruption,” you can be the judge.

So State Representative Jo Jordan wants to trash the personal belongings of the families living in an ad hoc community called The Harbor and clear them out, to who knows where, for a purpose she won’t state. She just wants them disrupted.

First of all, she will be working against state policy which is designed, if you can call it that, to reduce the number of unsheltered homeless. I’m not sure if The Harbor counts as “sheltered” homeless or not, but kicking the residents out of their dwellings and onto the street somewhere seems wrong every which way.

Here is where I think it’s appropriate to invoke a moral argument as well. Civil Beat’s editors might be reluctant to frame it this way, but I have no trouble describing Jordan’s proposal to seize these family’s property and dump them onto sidewalks somewhere as immoral as I understand the concept.

Although morality doesn’t depend on a religious-based argument, religion of course has had much to say on the subject of compassion. Here is a recent tweet reacting to Republican state governors refusing to admit Syrian refugees that would apply as well to those perpetrating “compassionate disruption” in Honolulu. So far at least 4,700 people retweeted it and 5,300 people “liked” it: 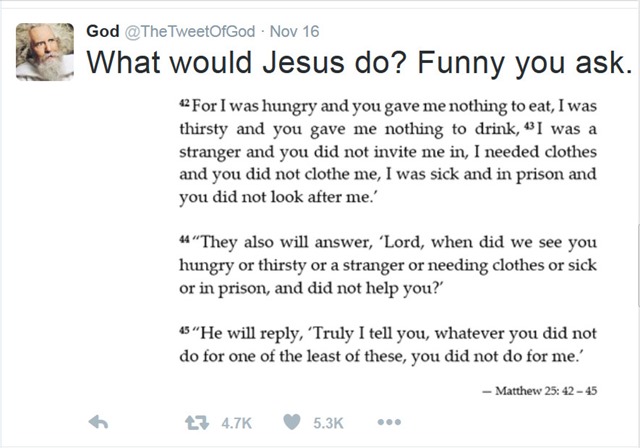