Repost: Gerald Horne on white supremacy and geostrategy that lead to the illegal takeover of the Hawaiian Kingdom


“
Hawaii was a modern nation, the envy of its Pacific neighbors, with a skilled diplomatic corps with representatives in major capitals and a modern infrastructure. In 1893 as settler rule was being imposed, a Hawaiian journal boasted that “the country enjoys all the advantages of modern civilization in a higher degree than most European countries: Postal services, telegraphs, telephones, railroads and lighting by electricity. . . . In the government schools two-thirds of the children are educated in the English language and one-third in Hawaiian.--Gerald Horne, in White Pacific: U.S. Imperialism and Black Slavery in the South Seas After the Civil War, University of Hawaii Press, 2007
”

It's July 6, the first workday after the July 4 weekend. We've had our fireworks, our barbeque, and it’s time to go back to work as usual. After July 4, 1894, when the overthrow of Hawaii took effect, some were celebrating, some not so much.

This is a repost of an article I posted last year. Since last summer, racism in America has returned to the spotlight as demonstrations crisscrossed the country following the August, 2014 police shooting in #Furguson. This post suggests that American racism was involved in the overthrow.

It was a pleasure to view Amy Goodman’s interview with historian Gerald Horne on Friday’s Democracy Now. The subject was our war of independence in 1776, which we’ll be celebrating as the July 4 holiday next weekend.

Of course, we know that the Founding Fathers were slave owners, and that the freedom they sought did not extend to their slaves. Horne holds that 1776 was in fact a counter-revolution, a conservative movement fought in order to preserve the colonists’ enslavement of Africans. In a nutshell, London was on the verge of abolishing slavery, which would have carried over to the British colonies. In reaction, the colonists set up the first apartheid state.

This may come as a surprise to non-historians and those who have not had a chance to read Horne’s many books. 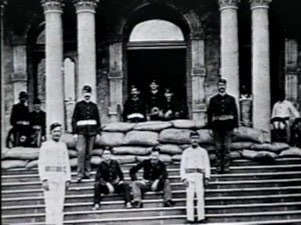 Amy notes that July 4 is not a cause for celebration for Native Americans or for African Americans.

It is similarly no cause for celebration in Hawaii. See: Repost: History that should not—and will not—disappear: July 4, 1894, illegal overthrow of Hawaii completed, 7/3/2011.

Gerald Horne wrote also about Hawaii and white supremacy as well as the geostrategy leading to the overthrow. Continuing on a bit from the pull-quote above:

Nevertheless, for those who cherished white supremacy, the idea of Honolulu challenging this ideology was viewed as outrageous. This outrage metastasized into morbid concern when Hawaii not only sought a diplomatic alliance with Japan—a non-European nation whose rise challenged the very essence of white supremacy—but began to import droves of Japanese workers, permanently altering the demography of the region while compromising the white supremacists who objected to suffrage rights for these migrants and exposing the easy canard that only blackbirding could address the question of labor. That Honolulu was long on record as being opposed to this odious traffic was one more reason for white supremacists to conclude that strangling and suffocating this nation should be a top priority.

Thus, though the Hawaiian Kingdom was contemplating ambitiously extending its influence throughout the Pacific, the United States in particular was casting a covetous eye upon this strategically sited chain of islands. As one naval commander put it in the late nineteenth century, Hawaii was “second in importance to no other single point on the earth’s surface.” The “distinctive feature of Hawaii,” Lucien Young continued portentously, “is that it lies at the center of an area so great the commercial and military operations across it are practically impossible, except by using Hawaii as a coal and supply station. Eliminate Hawaii from the map, and there are scarcely any battleships in existence which can operate across the Pacific, by reason of the fact that they cannot carry coal enough.” As the United States expanded across the North American continent, this presumed asset brought a detriment in that it expanded the territory that needed to be defended, a potential danger as the nation faced European powers in the East and a rising Japan in the West. “There can be no surer defense to the Pacific Coast of the United States,” said Young, “than to prevent any other foreign country from getting possession or control of Hawaii.”

You need to buy or borrow the book from the library to read more, but I’ll stretch a bit further, because it relates directly to the Democracy Now interview:

…
the 1852 Hawaii Constitution proclaimed in a bold challenge to its slave-dominated neighbor and chief trading partner across the Pacific, “Slavery shall under no circumstances whatever be tolerated in the Hawaiian Islands; whenever a slave shall enter Hawaiian territory he shall be free.”

Obviously, that was too much for Washington. So they did something about it.

As July 4, 2014 approaches, don’t count on the true motivations for the illegal overthrow of the independent kingdom appearing in our local newspaper. I wish it would, but that would be expecting too much from the current publishers, I’m afraid. (yes, this is a dare).