Rep. Brower reaches out to media as House plans to “talk” with him


“
The focus only on Rep. Tom Brower is misplaced. Dear House members: please look into a mirror before you take any action against Rep. Brower. Arguably, the Legislature as a whole is responsible, along with the City, for the very existence of the Kakaako homeless camp.
”

Rep. Tom Brower has apparently reached out to news organizations to clarify the events that led teenagers in Kakaako to assault him as he visited the homeless encampment there with his camera. Brower also sent me some attachments for my reference. 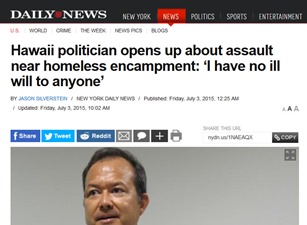 hile the tweets and news coverage initially ceased (his 15 minutes of fame had expired), suddenly a new story appeared in the New York Daily News. They did report Brower’s clarification, but they also took the opportunity to recap the recent incident, and, since it’s too juicy for editors to resist, they re-ran one of the infamous pictures in which Brower poses with his sledgehammer.

So while the copy was good, including a summary of the most recent witness report of  “a coordinated, gang-style attack,” the reader will not fail to see and be influenced by that sledgehammer pic. It also gave the reporter the opportunity to remind readers that

Hawaii has one of the worst homelessness rates in the United States.

[New York Daily News, Hawaii politician opens up about assault near homeless encampment: ‘I have no ill will to anyone’ , 7/3/2015]

So far, this and a new Star-Advertiser story (see below) are the only ones that Google turns up, and so (for the moment at least) the tsunami has abated.

Realistically, these stories are not going to put a dent in tourism at the moment, if ever. It’s simply another embarrassment for our state legislators to have their dirty laundry on display nationally.

Perhaps (?) this  is part of the motivation for the “talk” that House leaders will reportedly have with Brower, as reported in today’s paper, in the Local section rather than the front page.

"The House leadership will sit down with him to discuss this," referring to "his conduct and whether it is appropriate or not," said state Rep. Scott Saiki (D, McCully-Kaheka-Kaka-ako-Downtown), House majority leader.

As I said earlier, news folk can’t resist reiterating the sledgehammer thing. At least, in this article, it was comparatively low-key, and of course it is relevant to any questions of conduct that may come up:

Brower made national news two years ago when he used a sledgehammer to bash shopping carts used by the homeless.

And too bad that the article is so far back in the paper, because it does introduce to Star-Advertiser readers the issue of conflicting versions of events leading to Brower’s beating. Just a snip:

Kathryn Xian, head of the nonprofit Pacific Alliance to Stop Slavery, said she is looking into filing an ethics complaint against Brower, saying he provoked the reaction by his taunts, which she called inappropriate conduct.

While quiet descends on this incident, should the House announce the results of its “talk” and our local intrepid AP reporter write it up, we could see another wave of unfavorable national coverage.

Any commitment on the part of the state to actually implement an evidence-based Housing First program might be measured by Kippen’s budget while he has been czar: zero. He has been a czar without an army, a czar without horses. It follows that without support, he can’t help but be a czar without a conquest.

As far as I know, the legislature is not planning to “talk” to anyone about this.

The focus only on Rep. Tom Brower is misplaced.

Dear House members: please look into a mirror before you take any action against Brower. Arguably, the Legislature as a whole is responsible, along with the City, for the very existence of the Kakaako homeless camp.

Do I need to spell it out? Had the Legislature taken any effective action over the past decade to deal with growing poverty in the state and to create the affordable housing its residents demand, there would be no homeless encampment in Kakaako and nothing for Rep. Brower to do about it.