Arguments initiated during the session can be pretty weak, or just end up creating a “task force” or other frustrating delay. It’s better to have something solid going into the session.

Why not begin research in advance of the session to see if a well-founded recommendation might be made? That research would, of course incur expenses of its own, but would be money well spent. A radical (for this state) suggestion: the community on each island should be involved in the effort from the start.

Why research? For one thing, without a good job of it, we’ll never know if an interisland ferry system for Hawaii is a viable option, or what it would take (and cost) to get the ships moving. The Superferry was effectively started on faith, not on sound research. And it really cost the state, both to get it started, even though it was run by a private company, and to wind it down. The company also stopped paying its obligation to the state at some point.

There are channels between the Hawaiian Islands that can have treacherous sea conditions—completely unlike placid Puget Sound.

It is likely that a ferry could not run every day. Just as an example, there weren’t any Wow Farm tomatoes at the Blaisdell Farmers Market Wednesday because even a barge could not get through (you can score some of these great tomatoes at today’s KCC market): 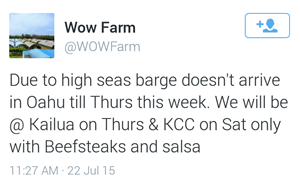 When the Superferry was running, there were cancellations …

… and there were days when there should have been cancellations. See this video, for example. That day would not have been pleasant for anyone aboard the ship. From a 12/14/2007 Honolulu Advertiser story no longer accessible on the web:

One passenger in the Hahalua Lounge was in so much misery that he had to be carried and dragged off to a first-aid area to lie down, Toro said.

So before new resolutions are introduced, why not learn about ocean conditions, possible routes around bad water, and what vessel types are suitable for the run?

2. Sizing of the vessel

Whether a potential ferry service will be privately or publicly offered, the size of the ship matters quite a bit. The Superferry was oversized in that it because of its size and the engines it was equipped with it gulped too much fuel to make a profit without a hefty fuel charge. The Superferry management did not impose the fuel surcharge it could have, and eventually the company went bankrupt. It was predictable, and predicted, by best-guess estimates made by people not connected with the operation who had no inside information.

For any new service we would have to be able to evaluate costs, capacity, safety and comfort in order to decide on a suitable vessel.

There was plenty of information even before the Superferry was out of the shipyard. This info could have provided, to knowledgeable engineers, a fair estimate of running costs:

Installation of the four MTU 8000 Series engines is now complete in the first of two[ferries], Austal Auto Express 107 metre vehicle-passenger ferries for Hawaii Superferry (HSF) currently under construction at Austal’s USA shipyard. Each 45 tonne engine has 20 cylinders, and  produces 8,200 kw (10,995hp) at 1150 rpm.

That information alone is sufficient to begin estimating running costs.

In fact, we left it to the Superferry company, which, it is likely, was really building military transport vessels to test in our waters. Those engines would be very appropriate to a military vessel which did not have to be concerned about the cost of fuel. For an interisland ferry, they proved expensive to feed.

3. We should make a realistic estimate of costs to the state for establishing and running a ferry service, whether private or publicly funded

The $40 million in state revenue bonds probably cost around $2 million annually to finance, I am told. Not to mention that in the end, the bonds became the responsibility of harbor users after the venture failed.

The state had to divert ag inspectors at taxpayer expense to protect against the transport of invasive species or bee diseases.

There were legal costs due to the lawsuits and appeals.

Costs to renovate harbors and relocate tenants were incurred.

Next time, let’s do this without an expensive special legislative session!

4. Arguments for a publicly-run system

The Staten Island Ferry in New York City is free to ride (or was, last time I looked). It used to cost a nickel. Point is, a rational decision was made that the ferry should be subsidized.

For Hawaii, subsidizing an inter-island ferry could be opposed by Hawaiian Airlines, for example, a private company. The media might take a position against a publicly funded system because while the Superferry (a private corporation) advertised heavily, a public ferry system would not. Of course, they wouldn’t put it that way exactly. The objection would not be explicit, of course, but they have their methods. That there was little to no criticism of the Superferry in the newspapers can safely be attributed to the media’s self-interest, I think. It was amusing to see an article on the Superferry posted on the Star-Bulletin website flanked by Superferry ads to the left and to the right on the screen.

To overcome objections, arguments would have to be well-developed and soundly reasoned, with consideration to potential and reasonable arguments of all sorts. It wouldn’t be an easy case to make in the era of billion-dollar cost overruns for s rather skimpy Oahu train system.

Without going on any further, I think I’ve made my case that the interests of the public will only be served if someone does some homework before going into a legislative phase, and if the public is fully involved from the very beginning.

Have studied it a lot, I recommend they not try to do it in the water and instead make the interisland ferry something like this: https://www.youtube.com/watch?v=8b-qBoFku_o