Crime in Kakaako exploited by newspaper

Rep. Tom Brower announced yesterday that he will press charges against the teenage boys who allegedly assaulted him in Kakaako. He has every right to do so, and assault cannot be condoned.

Brower didn’t make the announcement from his home or office—instead, he headed back to Kakaako for maximum effect. See: Tom Brower to Press Charges Against Homeless Teens in Kakaako (Civil Beat, 7/23/2015). The media, of course, also went to Kakaako to receive the message, that’s where it was delivered. See also a KITV video. 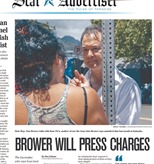 What a boon to the Star-Advertiser, though, which front-pages Kakaako whenever it can. The assault story is news, of course, but really, did nothing more important than this story happen in Hawaii, the nation or the world? Count on more front-page coverage perhaps when Brower does finally press charges, and then, of course, as the case progresses towards its front-page finale.

They were on the Kakaako case yesterday with the headline “Assaults in Kakaako soaring.” Well, ok. Push a few hundred more desperate people into that space and ignore their need for housing, and more crime can be expected. This is not unimportant or irrelevant.

But wait! There’s another article in the same paper, on p. B3: “Pine pushes for more police on Ewa Beach-Waianae Coast.”

Given those large numbers, how come this story wasn’t the front-page news?

Obviously, because it’s not Kakaako.

But watch that space, because the next luxury condo to be announced will certainly appear on the front page, probably with a huge portrait and gushing story about its fancy appointments. New condos bring new full-page ads to the newspaper, while the

folks in tents bring nothing. Also, the ultra-rich need to eat. So they’ll need their Zabars, Whole-Foods, cheese shops (they eat lots of cheese), and maybe even a specialty mayonnaise store (gentrifying Brooklyn already has one). Gentrification means advertising.

Also a chance for the editors (and the rest of us) to buy better cheese, but nevermind.

When the place is paved over with condos, there will be crime of another sort, perhaps domestic violence, for example. Will the newspaper count up those instances for a front-page article? Not likely.

Stepping back from these stories, there has been a crisis of growing poverty in Honolulu for some time. It’s not something that media often get into. Sure, infinity pools in luxury condos are more eye-catching images than families huddled together in small apartments or co-existing in tents on the street. Poverty in Honolulu is related to the dearth of truly affordable housing and to the lack of jobs paying a living wage. Media coverage and editorial pressure could help, but I guess there’s no cheese ads in that.

One thing that they could easily do is give up using the phrase “affordable housing” when the prices they are describing are not at all affordable.

The city, for its part, would not be unhappy to see the tents scattered. That’s what it has always done when there is an encampment. Scattering people harms them and neither improves their situation nor eliminates their desperation and hence encouragement for some to break the law.

What about Housing First, Mr. Mayor? What about affordable housing for everyone on Oahu?