Elvis Presley’s 1973 “Aloha from Hawaii” concert at Blaisdell Center is credited as the first program to be beamed around the world by satellite. It was viewed by an estimated 1 billion people. While this concert is still remembered, the origin of the Center as a war memorial has been “disappeared”. 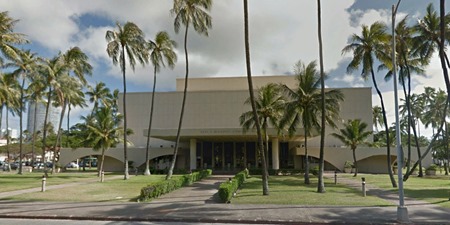 Did you know that Blaisdell Center, currently in the crosshairs for redevelopment, is actually a war memorial?

This has been a well-kept secret. There is a website dedicated to reviving and preserving the memory of the site as the war memorial that it is, blaisdellmemorialproject.org, and a Facebook page.

Blaisdell Arena, Exhibition Hall, and Concert Hall were dedicated as a War Memorial in 1964. These buildings ARE the War Memorial, and they are the only things left that connects us to that history. Preservation of the historic elements of this War Memorial are essential to ensuring that it's story is never forgotten again.

A memorial plaque is now gone. According to the website, it once read:

“Honolulu International Center: Dedicated to All the Sons and Daughters of Hawaii Who Served Their Country in Time of War and in Special Tribute to Those Who Gave Their Lives in Order That Freedom and Justice Might Prevail Throughout the World.”

It’s kind of hard to lose a memorial plaque—I’m guessing it is hidden away inside a dusty closet somewhere on the property.

In case you’re skeptical, I took the liberty of snipping two images from the website that prove it. Click the images for a larger, readable size: 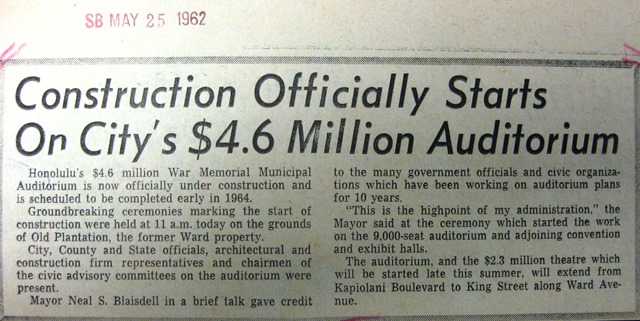 The website is not anti-redevelopment, but holds that ensuring respectful treatment of the site as a war memorial requires that the public be fully informed of its history and value. In fact, the media has obscured this history in articles reporting on redevelopment efforts. See for example, here, here, here or here.

These articles focus on the future without considering the past. If that continues, yet another part of Hawaii’s history will be obliterated.

The redevelopment of Blaisdell Center falls under the authority of the HCDA. As we know, they don’t seem to rest until areas under their control are paved over with buildings as high as they can get away with. Buildings are machines that turn land into money. The higher they rise, the more money they make.

HCDA-controlled buildings seem to be guaranteed front-page coverage in the newspaper, but the story is always about the new building. In this case, history would not be served by that narrow commercial focus.

Also spurring the redevelopment has been the condition of the current buildings. Our fair city doesn’t really believe in maintenance. I recall waiting in line to get into the concert hall as the rain leaked through holes in the never-maintained corrugated roof over the walkway. Thank goodness that was ultimately fixed.

I'm an endangered historic community center in Honolulu named Neal Blaisdell Center. I was built as a war memorial to serve the living while honoring the dead.

The website seeks documentation, oral history, and of course you can leave a donation to support the project.