“
Any pedestrian is at a grave disadvantage in the battle between man and machine that marks Honolulu’s busiest intersections, and they should not be expected to pay for their mistakes with their lives—Star-Advertiser editorial, 7/20/2015
”

I appreciate that this Star-Advertiser editorial and Disappeared News are almost on the same page with regard to pedestrian deaths in crosswalks in Honolulu. The number of elderly pedestrian deaths in Honolulu sets national records year after year, which suggests that nothing effective is being done to erase that shameful record. Wouldn’t a silver or a bronze be just as good for a change?

I say “almost” on the same page because the editors make a common but serious error in their recommendation. In the pull-quote it’s clear that the pedestrian is being blamed. In other words, the death was supposedly caused by “human error.” This is false.

So that you know what I’m talking about, let’s set the stage with this Google Earth snapshot of the intersection where 86-year-old pedestrian Wilkie Lin lost her life in a marked crosswalk. The image is identified as having been taken some time in 2011:

After a bit of introduction, the editors wrote:

The solution is not to remove the cycle track, nor to remove all crosswalks except those that already exist at intersections with traffic lights; that will force elderly residents to walk farther than they should have to. A better idea is to install a traffic light, or at least a flashing light, at the crosswalk near Poha Street to slow traffic and remind drivers to be alert.

Or how about just a couple of day-glo signs to start with? The crosswalk is mid-block on the right side, and that should justify signs.

But then the editors lose it, in the very next paragraph:

The best idea, and one that could take effect today, at no cost to taxpayers, is for motorists to replace the inattention, indifference and sometimes outright hostility they display for pedestrians — even elderly ones — with a dose of patience for folks who are simply trying to cross the street.

This is the fallacy of human error, that is, blaming humans for inadequate design. It’s a common, and dangerous, theme, whether it is a media tendency to quickly blame helicopter crashes on “pilot error” when repeated crashes suggest that the aircraft itself is dangerous, or in this case, blaming pedestrian deaths in crosswalks on lack of “patience.”

The editor’s “best idea” falls short of the imperative presented by the fact pattern.

…it is not a very plausible causal model that accidents arise from something about an individual employees performance rather than from the interaction of the performance and functioning of other factors in the system. To illustrate, if pilots make errors so frequently, doesn'tt this suggest that there is something not exactly foolproof about the design of cockpit instruments and the air traffic control system?

The paper is concerned with industrial accidents, but their conclusions hold any time causation is dismissed as due to “human error.”

Let’s be plain about this. The intersection at S. King Street and Poha Lane has no signage at all. Signs are cheap, but they have not been provided. The crosswalks are death traps because their design has been neglected.

Compounding this fatal omission is that earlier intersections (that is, intersections motorists would have travelled through) either had signs, or at one place, blinking lights.

So motorists will pay attention when they see those day-glo signs on both sides of the street. Then suddenly, there is a crosswalk with no sign, although the driver is expecting signs. Another way to put it is that the sign pattern reassures drivers that when their attention is needed, we’ll let you know, there will be a sign. Then suddenly there is none, so clearly, we don’t want you to pay special attention here.

This is my own photo of that intersection, taken on March 1, 2015. You can see the entire sequence of crosswalk photos here. 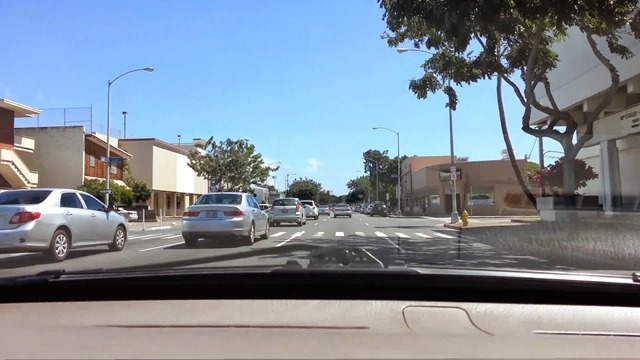 Still no signs. And now, someone has been killed there. I haven’t looked today, but likely there still are no signs at that crosswalk.

Let’s flashback to 2011. In the photo at the top of this article, look closely and you’ll see a pedestrian waiting to cross at the extreme right side of the image. A photo taken by the Google car a few second later shows that another vehicle (and the Google car itself) have failed to stop to let the pedestrian cross. 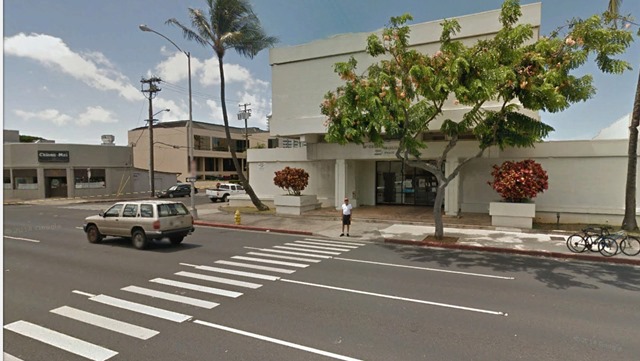 Perhaps that’s too much to ask in Honolulu. In contrast, I recall taxicabs screeching to a halt on Shenton Way in Singapore when I just put my foot out a couple of inches to cross the street. Perhaps in Singapore the traffic laws are enforced… but this is Honolulu. The pedestrian in the 2011 pic better wait until there are no cars in view, and even that is no guarantee of a safe crossing.

The lack of enforcement of traffic laws is yet another potential (and I suggest, likely) cause of pedestrian fatalities. A KHON video of another incident shows that traffic didn’t even stop when the crew carrying the camera set out to cross the street.

In other words, there is much that could be done—and is not being done—to save lives. Not posting signs is pure negligence and should not be tolerated. Not enforcing traffic laws, rather than a lack of patience, does not motivate drivers to stop.

These are avoidable deaths, so it is not at all unreasonable to demand that changes be made.

Editorial page writers have a lot of power, nor are they constrained to reporting only the facts of when and where an accident took place. Maybe they don’t agree with my point of view. They got close to it today, so I have some hope.

Editors could help save lives with the power of their giant presses. How about it?

One of the hypotheses tested in the paper cited is that “human-focused counterfactual thoughts lead to decisions to correct a problem through narrowly human-focused remedies.” It works like this:

In these pedestrian accidents, the driver, of course, is “always at fault.” This is correct, in the sense that when a car encounters a human body, the human will be injured or die, so the driver bears the majority of the responsibility for making sure that this encounter does not happen.

The reality, however, is that there is a shared responsibility. Crosswalks without paint or with no signs demonstrate neglect and can be held as contributory. Honolulu has plenty enough examples of roadway paint that has not been renewed to blame the city as contributory to accidents of all sorts.

Also, pedestrians vary in their ability to sense danger, see or hear danger, or realize danger. Age is certainly a factor. It is likely that if the 86-year old pedestrian had pushed a button to start overhead lights blinking, that she would still be alive today. Fact.

Hence the need to design a system that will protect pedestrians of all ages.

Overhead lights are one possibility. One intersection on S. King Street has them. Here is another possibility, from a Google hit (see: Wayne Parsons Law Offices, The Hawaii Pedestrian Crosswalk Safety Chronicles: Innovative Solution for Crosswalk Safety):