“
There was a great amount of property and economic loss as a result of the sweeps [of homeless encampments] conducted under “compassionate disruption” policies. The loss of personal property caused financial and emotional distress. Respondents reported losing personal identification such as a driver’s license or birth certificate (57 percent), clothing (43 percent), tents (40 percent), household items (30 percent), food (24 percent), medicine (21 percent), and children’s toys (13 percent).
…
One survey respondent reported losing in a sweep personal letters from his wife who is currently incarcerated. This same respondent also noted that her 5th grader’s schoolbooks were taken in a sweep and she has still had not had the money to replace them. Of the survey respondents interviewed, the confiscation of identification cards and documents has had the most significant impact negatively affecting their lives. Approximately 57 percent reported their identification was confiscated during sweeps.—study, The Effects of City Sweeps and Sit-Lie Policies on Honolulu’s Houseless

A study released today conducted by Tai Dunson-Strane and Sarah Soakai of the Department of Urban and Regional Planning of the University of Hawaii completely validates reports of the suffering and likely violation of Constitutional rights that the City and County of Honolulu has been inflicting on homeless individuals and families through its repeated day and night raids on homeless encampments and through enforcement of sit-lie ordinances.

If you have followed articles on Disappeared News or videos posted by H. Doug Matsuoka and others, or followed tweets by advocates such as Kathryn Xian (ED, Pacific Alliance to Stop Slavery), you already know of the pain and suffering of hundreds of individuals and families (including children) at the hands of city workers and police. The study quantizes these reports and expands upon them.

The study should shame news reporters who have settled for stenographic repetition of city statements instead of documenting the actuality and consequences of illegal enforcement that damages the lives of so many Hawaii citizens. It should shame city officials who have testified to the City Council without mentioning their illegal acts.

Click on the link above for the complete report, which includes a summary at the beginning. Here are some highlights (?):

Three main effects of city sweeps and sit-lie policies on the houseless emerged from the data: (1) property and economic loss, (2) physical and psychological harm, and (3) possible constitutional violations.

Many participants came back from work or showers only to find their property being carted away or thrown into trash dump trucks. In those instances where participants were told they could get their property back, doing so proved to be nearly impossible. The property was taken miles away from participants’ encampments and was often intermingled with other persons’ seized property. The $200 cost to have property returned was prohibitive for most. Very few respondents were told or were aware of a fee waiver and how to obtain one.

Based on the serious impacts of the sit-lie bill and related ordinances, we make five recommendations that are more fully described in the full report. In brief, we urge lawmakers to consider the following:

There is clear evidence that the sit-lie ban and related ordinances that comprise the policy approach of “compassionate disruption” cause multiple harms to one of the most vulnerable populations in the islands. Meanwhile, there is a shortage of both temporary shelter and affordable housing units in a high-priced and increasingly speculative real estate market. The problem of houselessness will not be solved through punitive policies that increase harm to this population. Adequate solutions are possible when all levels of governance including citizens and communities recognize homelessness as a significant problem in Hawai`i and prioritize resources to more adequately address it. This report clearly shows that short-range strategy will only lead to more serious long-term problems.

Update: from a news release that arrived in my inbox about a half hour ago:

Of those who had their IDs confiscated during sweeps, 81% reported being unable to retrieve their IDs. 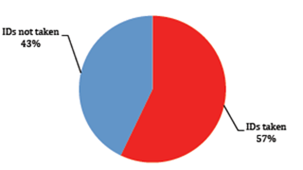 The findings of this report clearly show the ineffectiveness and harm of current criminalization laws targeted at the houseless. These laws should not be seen as a part of any plan to effectively address houselessness and should alternately be abandoned in favor of programs and policies proven to work toward transitioning both the chronically houseless population and the non-chronically houseless into permanent shelter with the appropriate social services available to maintain stable housing.