Rant for Flag Day: Honolulu’s true nature should be reflected on its city flag

The Union Jack in Hawaiian history

A tiny snip from The Hawaiian Flag (NAVA News, Jan-Feb 1985) clarifies the situation with the British in early history:

The fact that Kameha-meha placed the English flag over his government has sometimes been construed as a technical "cession of the islands to the English crown." But the astute Ka-meha-meha, while looking for English protection from the greed of other nations, stipulated that the Hawaiians should "govern themselves in their own way and according to such laws as they themselves might impose." The action of Vancouver was not ratified in England, owning to more important European questions, and a real protectorate was never established. Nevertheless, there was a nominal guardianship afforded by the presence of the English flag floating

The English flag over Honolulu was a warning to other nations, and also to lawless individuals. No man could tell exactly how far to go in the presence of that flag. The sailors of those days unquestionably ran riot in wickedness, and the early influences of white civilisation were absolutely awful. But there was a limit beyond which the lawless element did not dare to pass. The flag would permit England to advance whatever claim might be desired in case of any great trouble.

There was a foreign threat, according to the NAVA narrative. For example:

At first the English flag was established only upon the island of Hawaii. Then it passed with Ka-meha-meha from island to island as he conquered the high chiefs and became the sole ruler of the group. When the king made Honolulu his chief royal residence the flag floated over his house near the seashore. On Kauai, the island farthest north of all the group, there was a strong Russian influence. The Russians built a fort at the mouth of one of the rivers. Against their armed
possession of any part of the islands King' Ka-meha-meha made strong' objection, but, according to the statements of sailors, the Russian flag was used by the high chief of Kauai until finally displaced by the Hawaiian flag.

Today is Flag Day. We’ll look at Honolulu’s city flag and play with how it might better fit the city’s true nature.

Flags have played important roles in Hawaiian history. Check the sidebar for a snapshot of the early British actions in Hawaii. When they came again later it was different, and we have that whole thing about the British take over of Hawaii and how they “gave it back,” and so we have both the Union Jack in the state flag and a square in Honolulu named after Admiral Thomas.

The flag played a central role in the geopolitics of the time. There is good reading at the link in the box.

Since I was a little kid I’ve been fascinated by flags. I didn’t understand how any of them (except our own Stars and Stripes) came to be. Of course, there’s a history behind each. 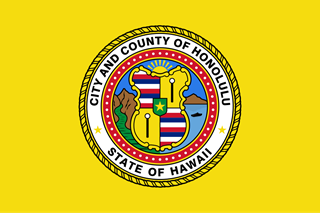 What’s wrong with this? Well, according to the North American Vexillological Association, everything.

From a recent podcast by 99% Invisible on the subject:

The principles of flag design, according to the North American Vexillological Association, are:

3. Use two to three basic colors

4. No lettering or seals of any kind.

For some reason, cities of the United States seem to have a lot of trouble with principle #4.

Yes, our city’s flag is just a cheap adaptation of the city’s seal. The symbolism is rather abstruse. Are those inverted thermometers in the seal? What can they be?? If it has to be explained, it’s not “simple.”

Anyway, I thought I would re-design it. I’m not a graphic artist, but nevertheless, I thought about what might possibly be an appropriate symbol of the City and County of Honolulu. Nothing seemed obvious. Stars? Stripes? Mountains? Ocean?

I had just read an advance copy of a new University of Hawaii study demonstrating that our city has effectively been preying on its houseless population (my words). The study, to be released tomorrow, should put several news reporters to shame because they’ve totally missed the homelessness story. We’ll get to that study on Monday morning.

Then it came to me, while I was doing the dishes. You know how that is—you get great ideas while in the shower, for example, when there’s nothing to write on to make a note. Anyway, what came to me

was “Peregrine Falcon.” The Universe sent me a message.

A predator! Doesn’t that describe a city that would destroy the lives of hundreds of its own citizens? And what a predator it is. The Peregrine Falcon is, according to Wikipedia, the fastest creature on earth. It swoops down on its prey at speeds up to  200 miles per hour—and then Pow!

Sounds just like what our city does to its large and growing homeless population. And it’s easy to put a bird on a flag.

Honolulu has raided sidewalk dwellers in Waikiki, Kakaako, and elsewhere in Honolulu hundreds of times. The raids take place day or night and result in the destruction of the lives of those affected—men, women and children. ID, medicines, cellphones, money and other valuables disappear, often into garbage trucks. This is described as “compassionate disruption” by Mayor Kirk Caldwell.

Without ID, a person can’t get housing, jobs, get into a shelter or apply for Section 8 assistance. Without the money they were saving up for the first month’s rent and security deposit, families cannot get into an apartment.

Without her knapsack and schoolbooks a little girl can’t do her homework and is too traumatized to succeed in school.

Having a criminal record under Mayor Caldwell’s sit-lie laws is also destructive and not at all “compassionate.” Paying fines means less chance of putting together that rental deposit.

The city’s behavior is better described as heartless predation. The image fits.

So since today is Flag Day, I fantasized that my flag might be flown on those garbage trucks that the city uses to destroy all those lives. As the city workers grab an dump people’s meager possessions, at least they’ll be honest about what they’re doing by showing their flag. 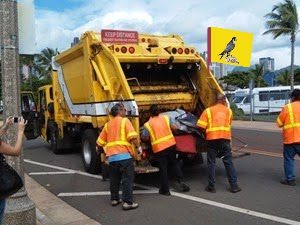 Here’s a picture of an actual city garbage truck on an actual raid in Kakaako, (illegally) throwing tents and other personal effects into the compactor to be irretrievably crushed and destroyed. With my flag added.

Are the city workers and their HPD escort really predators? They know exactly what they are doing, including the fact that it is illegal (violating the city’s own ordinances) to destroy rather than store this property.
And here’s the flag itself. I suppose I could have added an outline of Waikiki or Diamond head behind the bird, but enough is enough. 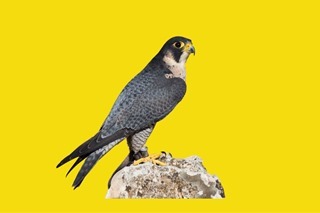 Seriously, though, the city could use a “real” flag, properly designed. There could be a contest to come up with a winner.

I’m not serious about the bird on the flag. It’s just a way for me to rant visually. I couldn’t figure out why I “received” that image except for the subconscious impact of the UH report, which you’ll be able to have a look at on Monday. I learned in a psychology class in Portland that when you’re given something out of the blue, check it out. Very Jungian.

If you’re into psychology, please explain to me how come so many sociopaths apparently gravitate to jobs in government. “Sociopathy” is not a description of the mental state of predatory birds or other animals—they gotta eat. It describes human behavior, including, I suggest, the acts of politicians who cater to their rich donors at the expense of the city’s most vulnerable citizens.

It’s so opposite of the “aloha spirit” to destroy people’s lives.