So far Google reports that 126 sites have carried the news that the Honolulu City Council has overridden the mayor’s veto and expanded the sit-lie ban.

It’s in today’s New York Times, it’s on ABC News, it is even on Al Jazeera and in The Guardian, for the world to read. 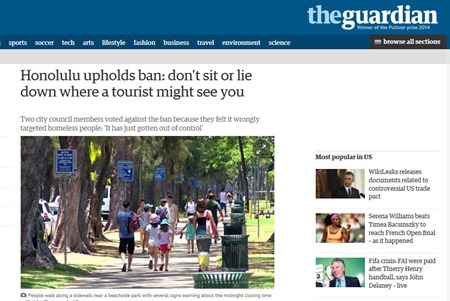 The Guardian article included what readers thinking of visiting Hawaii might encounter if they act like, well, tourists, and are cited by the police for enjoying themselves on a moonlit sandy beach in Waikiki:

The penalties for violating Hawaii’s ban on sitting and lying in public spaces range from warnings to fines and, if necessary, forcible removal. There are also bans on visiting beachfront parks after midnight. The Honolulu police have made a point not to make exceptions for tourists.

“Police have to enforce the laws equally against everyone,” [The mayor’s spokesman, Jesse Broder] Van Dyke said. “They don’t target homeless in park-closure enforcements.”

Tourists facing citations can either plead guilty, usually by mail, or fight the charge in person. A failure to do so can lead to a criminal warrant for missing court dates. Ironically, some tourists caught up in legal hassles have said the trouble has discouraged them from returning to Hawaii.

The Guardian article provided some additional context for the overseas reader…

… [Mayor Kirk] Caldwell has tried to address homelessness with a plan for a $42m Housing First program. That will not begin until later this year, and in the interim the city has developed a “transition center” on Sand Island.

Sand Island, known as Quarantine Island in the 19th century, was used as an interment camp for Japanese-Americans during the second world war.

… and it even mentioned the Hilo Hattie site proposal.

I usually don’t read comments on news articles, but many of the moderated trolls on the Guardian site seem to have gotten it. Admittedly, I’m cherry-picking a bit, many of the comments were trash or off-subject:

MountainMan23: So it's more important to make a buck off the tourists than to take care of their own people.

Nakor: Of course the level of homelessness presents a problem, but the "solution" of banning sitting down in public is absurd, mean-spirited, and will do nothing to actually solve the problem.

Jackhigh: This is a link to an update on the "transition centre". http://www.hawaiinewsnow.com/story/29223839/temporary-housing-for-homeless-to-be-built-on-sand-island
As you can see from the numbers involve, both the homeless who will be housed and the amount of funding,it's not going to solve the situation.

Dave Harding: They could have saved a fortune on signs and spent it on helping the homeless.

Auraboy: Just avoid Honolulu - there are a million other wonderful parts to Hawaii - this is like comparing downtown LA to Big Sur - both California coast - not remotely the same.

Members of the public who opposed the bill said the city should be more focused on providing housing and services than criminalizing homelessness.

"This is such a crisis," said David Cannell, 62, who was previously homeless for eight years. "It's a city of squalor. This isn't a third world country. ... Everyone has to go somewhere to get some sleep, at least. So where do they go?"

Councilman Brandon Elefante and Councilwoman Kymberly Marcos Pine voted against the override because they disagree with the principle of the sit-lie bans.

"It has just gotten out of control. ... When are we going to stop?" Pine said.

An earlier story reporting that tourists are being nabbed even made it to the Chinese news site SingTao Daily (snip):

I cite these examples because I suspect the news of Honolulu’s heartless treatment of its houseless citizens could get noticed, with a negative impact on tourism, which would affect all of us. The stories of tourists getting cited could result in some visitors coming forward in the press or in tourist literature with their own stories of inadvertent criminalization, which could be particularly unfortunate.

But this is apparently all secondary to our City Council.

Even if the matter quiets down in the news, as it will, should there be a legal challenge now that the City Council has overridden the Mayor’s veto of the expanded sit-lie bill, that will make news. If the ordinance is overturned, it will make news once again. Then, as people return to the sidewalks of Waikiki, that could be still more news.

How about our city council investing in Housing First as a plan, make it happen, and we can all enjoy the success that should result?