Supplementing my earlier article, this just in:

Here’s a report in Russian, accompanied strangely by a picture not of Honolulu but of the Kohala coastline of the Big Island of Hawaii. The translation is interesting, check out the snip below: 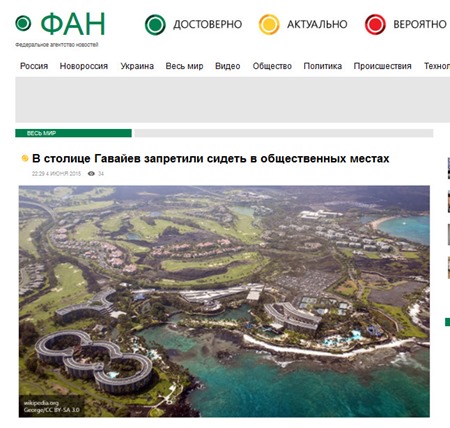 Honolulu, June 4. In Honolulu - the capital of the US state of Hawaii - passed a law prohibiting local residents sit and lie down in public places. New measures have been adopted, despite the veto of the mayor of the city and public protests.
…
A ban has caused a flurry of protests from the public. Most people think that, in fact, that law is directed against the homeless, for the sake of rich tourists. A number of activists see it as a violation of constitutional rights.

Hey, the Russians get it!

And so does this Chinese article, sort of: 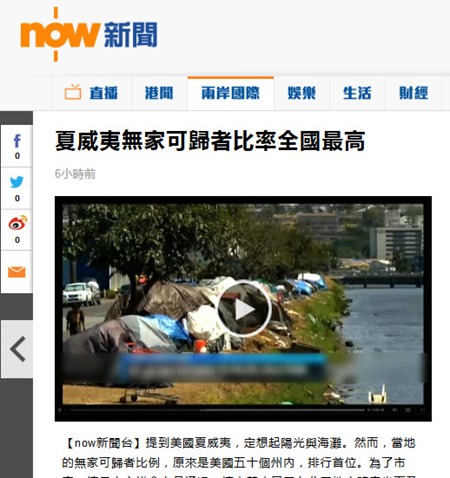 From Google translate, here is their take:

…the local rate of homelessness, the original fifty states within the United States, ranked first. For city, Honolulu City Council last month passed to prohibit the expansion of random people in public places to sit and lie down range. Although the mayor exercise its power to veto the decision of the city council, but the City Council finally decided to overthrow the mayor.

Honolulu, Hawaii, attracts many tourists. In the heart of the other side, it is that many homeless tent. As the local cost of living is high, property prices and rents, many people can not afford, forced to sleep or stay shelter centers in the street. Statistics also show each of the local people, there are 45 people homeless, the ratio is the highest in all 50 states.

The streets are always unsightly tent, so the authorities in Honolulu last year, to make provision for prohibiting the public footpath Waikiki Beach, Chinatown and other tourist areas, free to sit and lie down. Offenders are fined up to one thousand US dollars and imprisonment for 30 days in order to combat the situation of homeless people sleeping everywhere.

This story does not mention that tourists have been entangled in the city ordinance. The picture it paints is kind of ugly, no?