Today’s newspaper front page reports on an offshore wind energy proposal that brings back memories of a similar plan way back in 2008. The paper’s huge front-page spread then and now lends credibility to projects that may not merit the support.

Disappeared News first broke the news in a series of articles starting December 5, 2008 that Grays Harbor Ocean Energy Company had applied to install 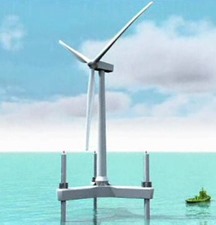 Life of the Land filed motions to intervene in the process on December 15, 2008. The Honolulu Advertiser finally picked up the news in a front-page article by Rob Perez on March 8, 2009, three months later, and Rep. Cynthia Thielen reacted in a letter-to-the-editor on March 11.

Unfortunately the links to the newspaper articles seem to have been deleted by the Star-Advertiser and the archive search pages came up blank for me.

These projects have several things in common, on first reading:

Besides the environmental obstacles, one of the biggest hurdles could be whether the company can reach agreement to sell the Penguin Bank power to Hawaiian Electric Co. [Grays Harbor president] Hamner said he has been told by a state renewable energy expert that HECO might not need all that electricity.

In fact, they might have needed none of it.

That was then. This is from today’s article:

Alpha Wind plans to sell the power to Hawaiian Electric Co., the state's largest electric utility, but HECO said it has not received any offshore energy project proposals.

"Although we see media reports from time to time about offshore energy project proposals, we do not have any active solicitations in progress," said HECO spokesman Darren Pai.

As to the whales, the location of today’s project seems to be a bit off to the side of the Penguin Bank whale sanctuary. It’s hard for me to tell from data immediately available, and without knowledge of whale migration paths into and out of the sanctuary. Here’s a map I posted in my December 16, 2008 article (in the article, it was animated), next to a snip of today’s newspaper front page: 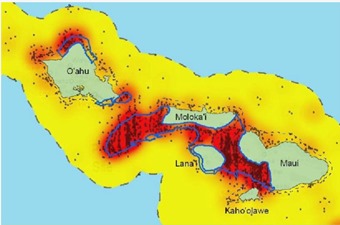 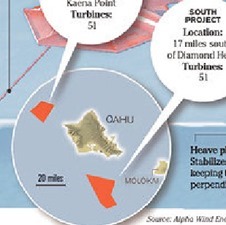 Whether the proximity of the new project is a threat to whales would have to be worked out—the earlier project was to be located smack in middle of the red area.

As to the price competitiveness, the cost of rooftop solar is continually decreasing, and utility-scale solar power may become more competitive with fossil fuel power in the near future. But the operating cost of a wind turbine installation does not decrease. Life of the Land ED Henry Curtis is quoted in today’s newspaper article:

Curtis said he questioned how cost effective the project would be due to the falling prices of solar panels.

"It is unclear, with the collapsing price of solar, how competitive the offshore site will be," he said.

Finally, it turned out that the labor for the Grays Harbor project would have come from Texas. While times have changed and perhaps there is a labor source here in Hawaii for all or part of the maintenance, there is nothing to prevent a company from supplying ships, crew and labor from elsewhere. Hawaii doesn’t have expertise or facilities for building or servicing offshore wind turbines.

This is just a preliminary reaction—we’ll clearly learn more as the process unfolds.