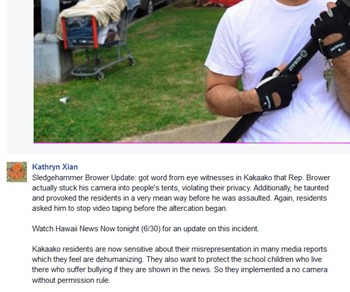 Sledgehammer Brower Update: got word from eye witnesses in Kakaako that Rep. Brower actually stuck his camera into people's tents, violating their privacy. Additionally, he taunted and provoked the residents in a very mean way before he was assaulted. Again, residents asked him to stop video taping before the altercation began.

Watch Hawaii News Now tonight (6/30) for an update on this incident.

Kakaako residents are now sensitive about their misrepresentation in many media reports which they feel are dehumanizing. They also want to protect the school children who live there who suffer bullying if they are shown in the news. So they implemented a no camera without permission rule.

There should be additional coverage on Hawaii News Now tonight, tune in or check their web pages afterward.

A new story is already posted on the Hawaii News Now website: Hawaii lawmaker denies provoking attackers at homeless camp (Hawaii News Now, 6/30/2015). This article is worth reading, so I won’t snip from it. It also explores the dimensions of privacy of those living on the sidewalk and whether they may be photographed. Hawaii News Now has separated itself from the pack by not simply accepting the official’s word about 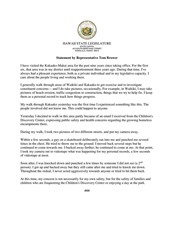 what happened—they went back to gather other witness accounts. Good job by @MilekaLincoln.

On her Facebook page she posts Rep. Brower’s statement about the incident, which oddly has been released on official House stationery and posted by the House Majority on their Facebook page. (For a readable copy, click on the image).

I’m wondering if Rep. Brower was visiting the Kakaako encampment as an individual, or if he was somehow on House business, as the use of official stationery might imply?

Given the differing versions of what took place last night, I would like to suggest that if there is to be an investigation, it should include a forensic analysis of Rep. Brower’s camera. It is often possible to recover photos or videos from a memory card even if they have been deleted. For the best chance of recovery, investigators should have access to the camera as soon as possible—preferably, immediately.

Whatever the ultimate truth of the matter, one version I don't see how anyone can believe is Rep Tom Brower's version. This is a man who is so hostile to the homeless that he took a sledgehammer to their possessions. How can anyone believe he was at a homeless encampment innocently taking photos? Rep. Brower has long lost all credibility.