As we gazed upon this morning’s paper, Nanette reminded me of something that we’ve commented to each other before. To paraphrase, when people visit and the floor is clean, no one says anything. But if the floor is dirty, they’ll be talking about it.

One problem with giant graphics is the space they take. At least they should be relevant and informative. Today’s front page has two giant telescopes and a headline blaring in bright red,
“Not on our land.” I think that works well. The fist and the typography (all caps, red color) cry out the message effectively. If one didn’t know that this was a telescope issue, there are two largish subheads left and right labeling the telescopes, no reading glasses needed at all to understand. There’s text overlaying a good part of the graphic, so less space is lost. Good job.

The other story is headed “Isle donor’s blood sold to hospitals.” That’s exactly what the story is about, and it’s a complete and clear statement.

That story is by William Cole, who was given the space in the paper to completely cover the issue. That’s why I value story over graphics. Give as much space as possible to the reporter and we, as readers, benefit. Cole’s story both explained why blood needs to be sold, and also raised a question in my mind as to whether blood bank executives need to be compensated quite so well.

The three little headlines at right are all very good IMHO and make me want to check out each story.

Inside, the local section is really good, so I need to provide another snip. 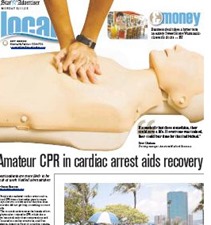 This is just part of the top of the page. The graphic is very appropriate to the story, even illustrating, in a pinch, how one might do CPR even in the absence of training. The headline is compelling: “Amateur CPR in cardiac arrest aids recovery.”

The story is good, giving a fair and unexaggerated account of the benefits of learning to do this, and even giving details of a free training opportunity (this Wednesday, 445 Cooke St., only a few minutes needed between 11 a.m. and 2 p.m., call 377-6668 for more info. This is one day only. Walk-ins acceptable).

The second headline on the page is also a winner, “Some in HPD can’t wait for body cams.” The reporter, Bob Shikina, had enough space to do this one properly, covering also the funding situation at the city, state and federal levels.

Do traditionally-done headlines have to be boring? No more so than the story underneath. There’s not much that can be done to make a federal home-loan story sexy, but the sugar cane headline drew me in. Who would know that local rum distilleries were actually growing particular varieties of sugar cane for their products?

The article that grabbed me the most was Kokua Line’s discussion of pedestrian signals. I’ll have to discuss that one in a separate post.

I also don’t mean to imply that there have not been good headlines in the past. And given the space, reporters can bring us the stories that we really buy the paper to get. There are also several very experienced reporters whose bylines I seldom see anymore, and I wonder if the graphics were smaller, might they be given that space to bring us the reporting they do so well.

Nanette and I maintained our CPR certification for many years, but at something like $40 each per year eventually we stopped taking the classes. If CPR is so beneficial, why aren’t the classes free for everyone? Especially these days, the method has been simplified—usually no mouth-to-mouth. So more people should be willing to take a class if the price were right, especially if they don’t need certification.

When someone keels over, there should be a good chance that a bystander who knows CPR can step in to help save a life.

If we can manage successful grass-roots campaigns to ban plastic bags, for example, couldn’t we somehow do something to make knowledge of CPR more widespread in the general population?

I had an experience many, many years ago in Singapore that I will never forget. Walking with a Singaporean friend along a pier, I found I was still talking but he wasn’t next to me any longer. He had seen someone floating in the water and had suddenly dived off the pier to give assistance.

My friend and others brought the floater to shore while we ran back along the pier. On the beach they held him upside down by his feet and were draining the water out of him. I thought that maybe that was not necessarily a good idea, he needed CPR. No one in the crowd knew how to do CPR. I didn’t either, in those days. But I said, put him down over there, and I’ll do the best I can while someone else goes and gets an ambulance (there were no cell phones then). Standing and looking at him is certainly not going to do him any good.

I had no idea what I was doing, though I did breathing and heart compressions. When the ambulance came, they shined a light at him and told me he had been dead for some time.

I didn’t know what I was doing. I had thought of taking a class before that incident, but hadn’t actually done it.

Eventually, I did take CPR classes, and that incident has come back to haunt me each time.

So I’ll be over at Cooke Street on Wednesday, to brush up and practice.

Will you be there? It’s free, try it.