Denby Fawcett: The Brothels of Chinatown (Civil Beat, 3/31/2015), expertly written as usual, was a tour of the lurid lures of wartime Chinatown itself as Fawcett tailed a walking tour of the area led by Carter Lee Churchfield.

The tour is a kind of wacky wildlife expedition; a chance to learn more about the wild life that flourished during the war: the tattoo parlors, bars and sex houses where a hard working prostitute could service up to 12 customers in an hour, up to a hundred men a day.

What a work ethic! Nevermind.

The article brought back memories of the film From Here to Eternity which I saw for the first time last year, out of curiosity—not about the war, but to see what Honolulu was like at the time, even if filtered through the lens of an award-winning but nevertheless fictional production.

And then there is reaction to the article: Tour of WWII-Era Chinatown Brothels Is Disrespectful (Civil Beat, 4/1/2015).

Ok, point taken. But this part of Hawaii’s history in particular cannot be erased. Not only that, but in a sense, it might be inspirational. Even as we struggle vainly to find our niche in high tech, there are a couple of things that Hawaii did and still does well, including tourism and R&R. Perhaps the style has changed, but not the substance. 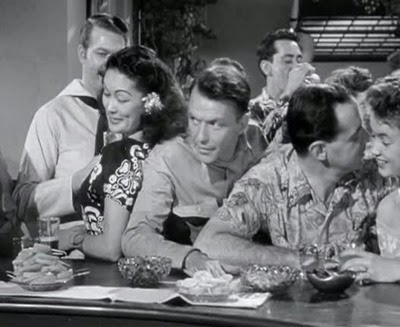 James Jones’ From Here to Eternity (the book) is set in 1941 Hawaii and not only chronicles the soldiers’ life (described in a review as one of “courage, violence and [the] passions of men and women who live by unspoken codes and with unutterable despair”) but reveals some of the struggles with democratic and gender values that punctuated American life at that time of national anguish (see quotations below).

The 1953 movie of the same name starring Burt Lancaster, Montgomery Clift, Deborah Kerr, Donna Reed, Frank Sinatra, Ernest Borgnine and including an uncredited appearance by George Reeves, is an evergreen drama/romance film based on the James Jones novel that won 14 Oscars and  seven nominations. It does, indeed, include snapshots of Chinatown Honolulu. It ends with Pearl Harbor, or it perhaps could have gone on forever, just as the Chinatown scene actually did.

It’s not over even today, folks.

I can’t remember if anyone said anything profound in the film, but the book, of course, is easy to snip from. Here are some samples, out of context of course:

“They shouldn’t teach their immigrants' kids all about democracy unless they mean to let them have a little bit of it, it only makes for trouble. Me and the United States is dissociating our alliance as of right now, until the United States can find time to read its own textbooks a little.”
― James Jones, From Here to Eternity

“Everybody talks about freedom, citizens," the big man said gently, seeming to draw upon that very sure source of personal knowledge again, "but they don’t really want it. Half of them wants it but the other half don't. What they really want is to maintain an illusion of freedom in front of their wives and business associates. Its a satisfactory compromise, and as long they can have that they can get along without the other which is more expensive. The only trouble is, every man who declares himself free to his friends has to make a slave out of his wife and employees to keep up the illusion and prove it; the wife to be free in front of her bridge club has to command her Help, Husband and Heirs. It resolves itself into a battle; whoever wins, the other one loses. For every general in this world there have to be 6,000 privates.”
― James Jones, From Here to Eternity

“And let me tell you something else, my friend," she said in the precise enunciation of a trained nurse talking to a worried patient. "It is all very easy for a man to talk about living in the present. Much more so than for a woman, who is liable to get knocked up higher than a kite every time the man enjoys himself in the present. That's one thing I don't have to worry about, thank God. But there are a lot of others: such as what I am going to do when my husband kicks me out and then my lover throws me over when he has to support me, and me not being trained for anything but to be somebody's wife and having to do all my politicking and achieving and gain what little success I can by getting behind some stupid man and pushing him.”
― James Jones, From Here to Eternity