Did you know: Hawaii taxes poverty and gives tax breaks to the upper 1%


Appleseed: The wealthiest 1% in our state will receive a $43 million tax cut in 2015 while low-income families are scheduled for no relief at all.

(From the Appleseed email, emphasis in the original)

The wealthiest residents will receive a $43 million tax cut in 2015. This entire tax cut will go to the top fifth of households. Nearly all of it (91%) will go to the wealthiest 1%, who will get an average tax cut of $7, 749. HB 886, which would have increased the low income renters and food/excise tax credits and extended the top marginal tax rates, did not receive a hearing by Senate Ways and Means.

The only bill alive, SB 555, proposes an increase to the food/excise tax credit. This refundable credit, targeted at low income families, has not been increased since 2007. The proposed credit increases have been blanked out of the current bill, but previous versions only promised $6.5 million in tax relief for working families.

Our lowest-income families have the second highest tax burden in the country, paying twice the effective tax rate as the wealthiest 1%. Our regressive tax system means the bottom 20% of households pay 13.4% of their income toward state taxes, largely on the GET. With the scheduled cuts, the wealthiest 1% will pay just 7%.

The possible extension of the GET rail surcharge will maintain this regressivity. Regardless of opinions on rail, we cannot further burden Oahu's working families with GET increases. To balance any possible extensions, we must significantly increase the food/excise tax credit.

Hawaii has been criticized incessantly by its struggling Republican party as a one-party state. We certainly are unique in that respect, but I’ve always held that we just do things differently here in many ways. Our state legislature has passed some remarkable legislation over the years. We could show the rest of ‘em a thing or two, starting with our Prepaid Health Care Act of 1974 at least.

On the other hand, our state government has abandoned traditional Democratic party egalitarian doctrines and carried a plantation-style economic oppression of the working class into the present era. That is, pay little, charge a lot. And tax them also, as it turns out.

Party affiliation isn’t gone, but it means less here. In fact, heck, we can protect our 1% quite well, thank you, even without Republicans. And the wealth gap between the rich and poor in Hawaii, which gets no traction in our right-wing press (which depicts our homeless citizens as some kind of vermin, to be removed from sight, instead of visible evidence of the poverty plaguing the state) would be the envy of any Republican-dominated state legislature.

Jenny Lee, Staff Attorney at the Hawaii Appleseed Center for Law and Economic Justice, noted in an email timed to coincide with Tax Day: the wealthiest 1% in our state will receive a $43 million tax cut in 2015 while low-income families are scheduled for no relief at all.

I can’t say it better than Jenny did.  Check out her talking points in the box. Here are infographics she shared, with permission to repost them. So read and weep. 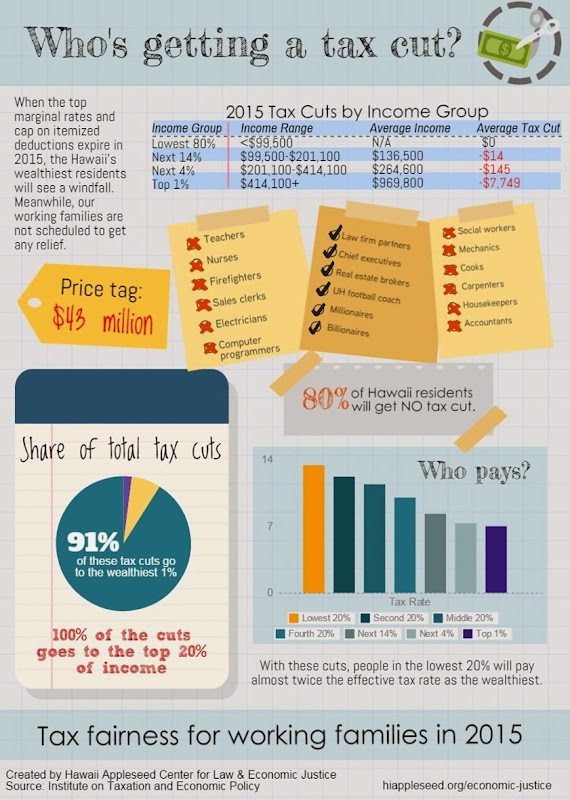 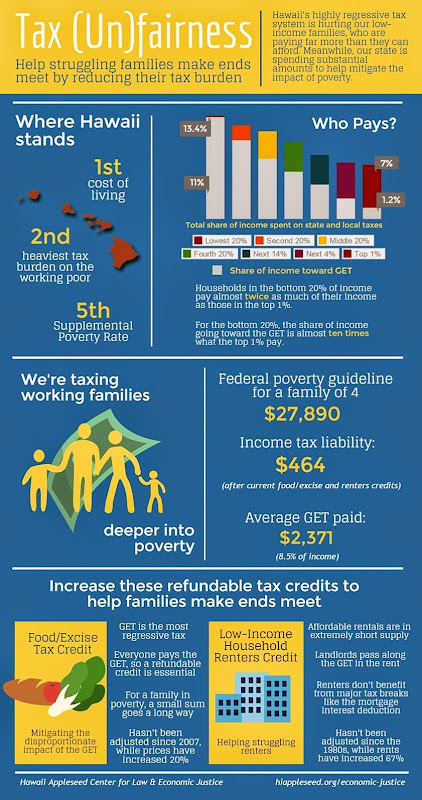