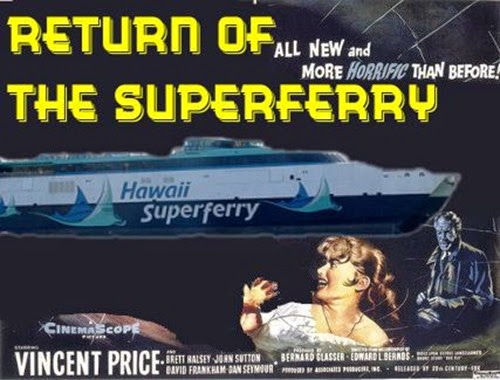 The Associated Press reported that a pair of resolutions have been introduced today by Sen. Michelle Kidani asking the state Department of Transportation to study the feasibility of an interisland ferry system modeled after the ferries plying Puget Sound.

The article reports that the Hawaii Superferry shut down when a judge ruled that an environmental impact study was not conducted as required. This is true, but the Superferry company actually declared bankruptcy. Losses were predicted by back-of-the-envelope calculations (see box) and reported here, but the question of profitability was not taken up by either government or the commercial media.

The Hawaii Superferry was sailing under a facade of success in the summer of 2008—boasting of record ridership—but it had already begun to shortchange the state on its monthly fees, according to an Associated Press review of Department of Transportation records.

The company's inability to pay fully in July 2008 indicates it was in troubled waters nine months before the Hawaii Supreme Court decision widely blamed for the ferry's closure came in March 2009. The court overturned a state law that allowed the Superferry to operate while an environmental impact statement was being conducted.
…
"They were having financial difficulties already, and that's why they were heading toward bankruptcy," said state Transportation Director Brennon Morioka.

An early estimate of the profitability of the Superferry operation was developed and circulated by email. Of course, this was speculation, but the legislature might want to be sure that someone will run the numbers well before cracking that bottle of champagne across the bow of Superferry II.

According to the company, they expect an average load of about 400 people, and 110 vehicles per trip.

John Garibaldi, Superferry's president and chief executive, stated that the weekly operating cost while the ship is idle and docked at Honolulu Harbor is $650,000 per week.

The current price for marine diesel fuel in Honolulu is $740/metric ton or at least $2.07 per gallon.

A later estimate, with more explanation, is here. Note the conclusion: “Hawaiian Air is at least twice as efficient at moving people interisland as is HSF.”

The unsanitary conditions caused by passenger “discomfort” were not covered by the media either(except possibly for one story that made it into the Honolulu Advertiser). But more significantly, the media did not attempt to estimate the cost of running the oil-guzzling engines on the oversized ferry boats and verify that, since the operators waived imposing a fuel surcharge, almost every run resulted in an operating loss. You were able to see estimates here on Disappeared News that suggested the ferry company must have been running on red ink.

If they couldn’t make money, bankruptcy was inevitable. It was the bankruptcy that shut them down.

Note that the Superferry company was a large advertiser. Could that have affected honest reporting on its condition?

I personally find it surprising that there is not some kind of interisland water transportation, but it’s clear that our state legislators bought a severely flawed proposal hook, line and sinker (sorry). The Superferry was criticized fairly from the beginning.

In the end, the state (actually, harbor users) ended up out-of-pocket for infrastructure improvements and we got nothing for it except possibly some souvenir barf bags.

The legislature needs to do better if we are to have a viable water transport system.