This is a followup to Is “Karl Rhoads” the source of voting record information used by Calvin Say’s attorney that was questionably obtained? (2/22/2015). That article questioned whether information obtained by Karl Rhoads, committee chair of the special committee investigating former Speaker Calvin Say’s qualification to hold office, was improperly provided by Rhoads to Say’s attorney.

Say’s challengers also questioned whether that information, obtained by Rhoads from voter registration files, was used in violation of HRS 11-14 and 11-97 which restricts its use only to election purposes.

The article appeared on Disappeared News on February 22. A partially redacted version of Say’s submission was made on February 23 and posted to the committee's website. The new document includes redactions, but the street addresses are not completely redacted.

The redaction appears to be a concession to Collins’ request that confidential information be removed from Say’s letter:

The Voters request that these issues be clarified and that the Committee be instructed to redact confidential information from the view of the public.

Fine as far as that goes, except that there is no indication that the document posted is not the document submitted by Say through his attorneys. It appears, and any future historian, attorney or curious citizen will find, that the allegedly illegal material is not there.

This may appear a quibble, but the Capitol website is the public record, and often enough it is made to be inaccurate, as I have noted from time to time. Some testimony is never posted, for example, and at times a legislator kills a bill while falsifying the record. “Gut and replace” bills are not clearly identified and often falsely indicate that the material has been heard on the floor. Probably more shenanigans go on than anyone short of a Sherlock Holmes with lots of spare time could discover.

So, good that Rhoads redacted (part of) the material that should not be exposed to public view. He should complete the redaction and also note the change on his web page so that it is clear what he has done.

Here’s the detail, for the record: 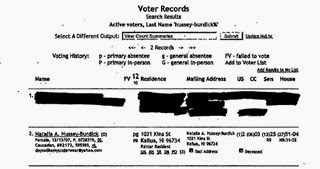 This is page 25 of the original document, as submitted to Karl Rhoad’s special committee by attorneys for Calvin Say Bert T. Kobayashi and Maria Y. Wang. 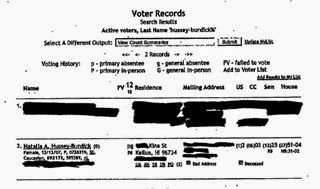 This is the same page as it is posted today. Note the additional redactions. In other words, the document has been altered from the authentic copy submitted by Say’s attorneys. The addresses are not completely redacted.

(These images are intentionally too small to read here, since the information should not have been public in the first place).

In the original document, this page (page 25) has Karl Rhoads name on it as the person who obtained the data. It appears that Rhoads, who was chair of the investigating committee, turned his search results over to Say’s attorney, who included it in his submittal back to Rhoads’ committee.

A simple note on the web page will do the trick. It’s more than a quibble, especially should it turns out that Rhoads may be prosecuted for violating the statutes. In other words, yes, redact the information, but also say what you have done.