Well, it all has to do with how we write dates in this country, but what the heck. Let’s celebrate.

How to celebrate? If you can get down to the KCC Farmers Market this morning, Sweet Revenge has prepared some special pies. Here’s an Instagram posted yesterday of one of them: 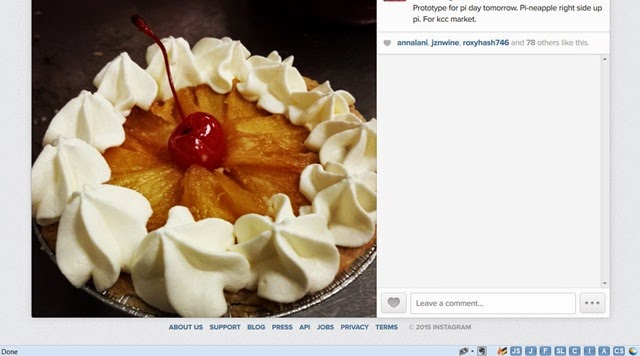 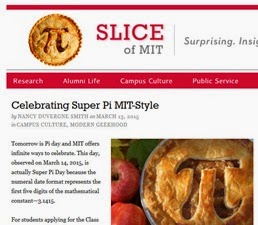 Out in the real world, colleges (where people understand the importance of pi) are holding celebrations generally involving baked goods. Yes, it’s a bit irrational, but that’s what it’s all about, isn’t it?

MIT will celebrate by posting acceptance notices at 9:26 a.m. instead of in the evening today, which should, as they report, make 850 students happy about pi day.

You can rely on pi

In this day and age, when news anchors and politicians lie to us routinely, it’s nice to know that the diameter of a circle is related to its radius in a fixed way, no matter if anyone tells you differently. Truth. There are no “pi deniers.”

But there once were. There is the case of the 1897 Indiana Pi Bill, which would have had the effect of re-defining the value of pi as 3.2. Reading this, it could well have been a report of any day at our own state legislature:

Upon its introduction in the Indiana House of Representatives, the bill's language and topic occasioned confusion among the membership; a member from Bloomington proposed that it be referred to the Finance Committee, but the Speaker accepted another member's recommendation to refer the bill to the Committee on Swamplands, where the bill could "find a deserved grave". It was transferred to the Committee on Education, which reported favorably; following a motion to suspend the rules, the bill passed on February 6, without a dissenting vote. The news of the bill occasioned an alarmed response from Der Tägliche Telegraph, a German-language newspaper in Indianapolis, which viewed the event with significantly less favor than its English-speaking competitors. As this debate concluded, Purdue University Professor C. A. Waldo arrived in Indianapolis to secure the annual appropriation for the Indiana Academy of Science. An assemblyman handed him the bill, offering to introduce him to the genius who wrote it. He declined, saying that he already met as many crazy people as he cared to.

When it reached the Indiana Senate, the bill was not treated so kindly, for Waldo had coached the senators previously. The committee to which it had been assigned reported it unfavorably, and the Senate tabled it on February 12; it was nearly passed, but opinion changed when one senator observed that the General Assembly lacked the power to define mathematical truth. Influencing some of the senators was a report that major newspapers, such as the Chicago Tribune, had begun to ridicule the situation.

So the bill got through the first reading in the Indiana Senate and could well have become law. It actually gave three choices for pi. How convenient that would have been.

At least it didn’t seek Biblical justification. Chronicles, chapter 4, verses 2 and 5 would seem to define pi as exactly 3.

Ok, now to some meal planning. Let’s see… chicken pot pie for a main course, then that awesome pie in the Instagram picture above for dessert.

So if you see this in time, race down to KCC for your share. It will be crowded, but worth it.