Now, just give it some time... don’t feel it will stay like this forever. The odds are very much against it. And it’s sad.

For a reminder of reality, I ventured a couple of blocks north of Vineyard to see how the real world is faring. The neglect is just the same as it always was. Maybe worse, even.

Just one block away is a crosswalk I’ve been writing about for many years. In the photo below, a pedestrian pushes her cart across, but there is now no paint left at all. 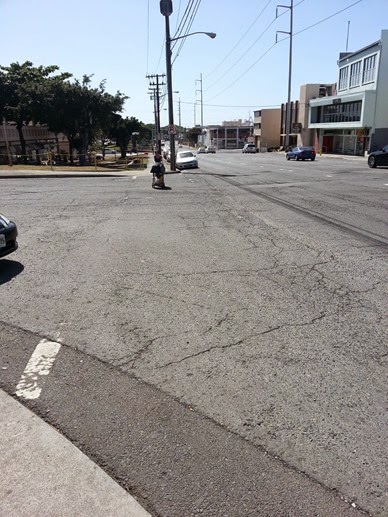 She is at the mercy of drivers who may choose to stop or not, and where they stop is up to them. There’s no stop line and the crosswalk itself is long gone.

This crosswalk is near both a library and a school.
Here’s a snapshot of the same intersection from an article posted in February 28, 2013. There still was a tiny bit of paint a driver might notice, if it weren’t raining: 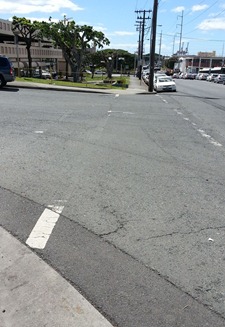 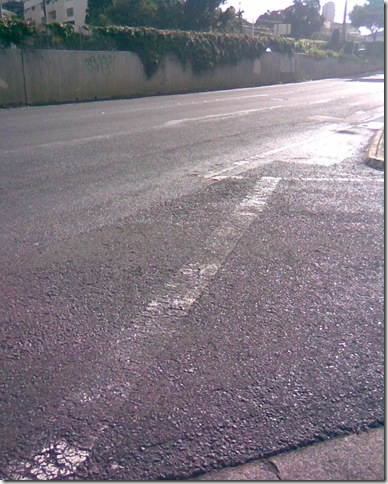 So this one crosswalk has seen no paint for five years or more.

Yes, I’m fixated on street paint. It’s a marker for maintenance or lack thereof that anyone can see with their own eyes.

It’s easy to contrast Honolulu with places that care just by flying over with Google Earth, for example. Tokyo: 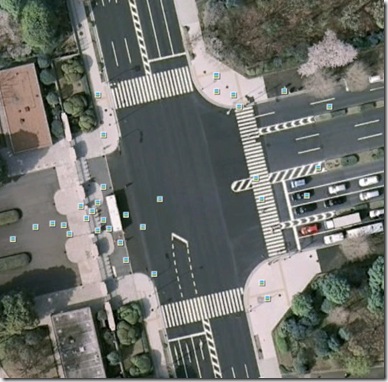 But there are other signs of neglect that are easy for a pedestrian or bicyclist to spot while moving through the city. Let’s take a step back from where I took the earlier picture. 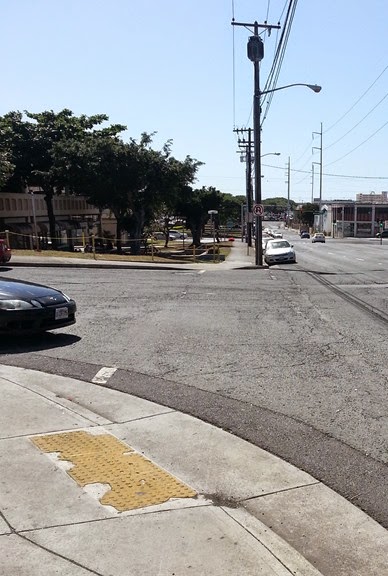 Check out the yellow pad, designed to signal blind pedestrians that they are at a sidewalk cutout facing the street.

This pad is falling apart. Here’s yet another easy-to-spot sign of ongoing neglect of our streets.
Just walking to the State Capitol I was able to spot several of these. 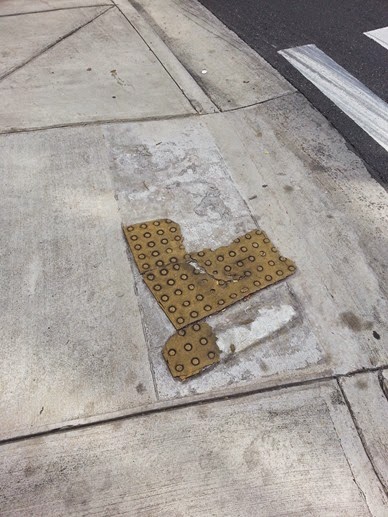 Some of them are jagged, quite possibly enough to trip up either a blind person or a senior citizen trying to navigate with a walker. 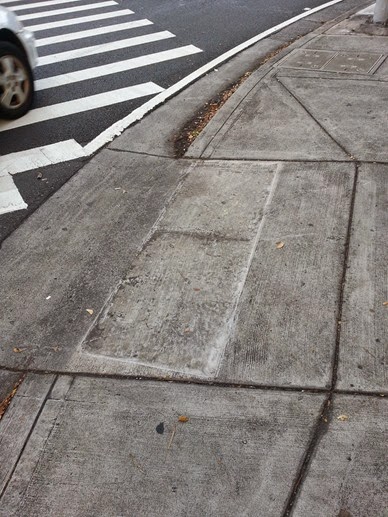 At many other intersections, the pad is completely gone and never replaced.

Yeah, that white paint looks so good… don’t let it fool you, though. 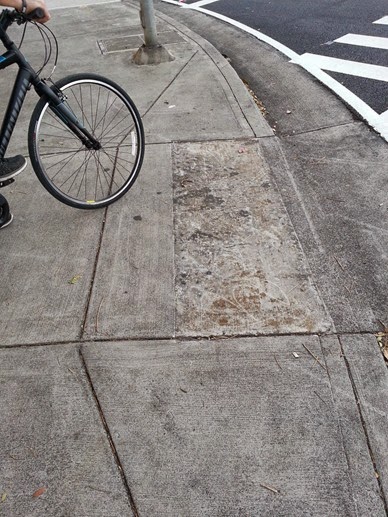 Here’s one more, the last for today.
On the way home I revisited the “pothole that goes to China,” a broken sidewalk that I’ve noted here since at least 2008. Clearly, reporting it didn’t do any good. It’s pretty much the same. That’s a sidewalk in need of repair for seven, count ‘em, seven years—at least.

What has changed over the years? Why should we remain in this cycle of decay forever, punctuated only by expensive repaving when enough people get upset in communities with clout (clearly not including Kalihi or Liliha, anyway)?


Looks like the pictures are up the street from VINEYARD. Nevertheless, give 'em 2 years and they'll probably be repeating the work, anyway.


Yes. It's like they pave one nice looking streak while nearby things continue to rot all around it.