OHA will hold a workshop for its board of trustees on the State Ethics Code and on the Sunshine Law tomorrow. Here’s the announcement: 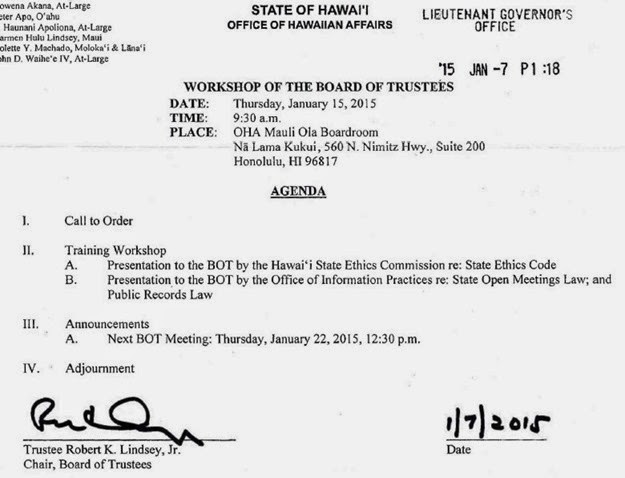 The training will be conducted by the State Ethics Commission and by the Office of Information Practices. Probably, since the meeting is supposed to be open to the public, anyone interested in attending might try to sit in, if you see this in time.

Now, I doubt that OHA reads Disappeared News, but heck, isn’t this exactly what I proposed in Police Commission just one part of Hawaii’s board and commission problem (12/20/2014)? I referred to my experience on the State Rehabilitation Council, and suggested that similar requirements (as appropriate to each) might be imposed on each board or council in Hawaii:

The Council provided training … there was a half-day training in the Sunshine Law (open meetings, open records). And another half-day on ethics. Those trainings were conducted by the Office of Information Practices and by the Ethics Commission staff. The OIP training included a quiz to test our understanding.

The state rehab council has certain duties that it performs on an annual basis. Those were spelled out in another thick notebook, and when the time came, VR provided data such as current performance, budget, and so forth, that we would need to carry out our responsibilities.

So I’ve described to you a board that is designed to be functional. I believe, as a result of their attention to training and information gathering, they were able to do a good job. As new people rotate through the board, they will each be properly equipped for their assignment. I left the board knowing that my replacement would be similarly equipped to do the work required.

This should be institutionalized and individualized for each board or commission.

So while I primarily had the Police Commission in mind, the principle would apply equally to any board, and I am glad to see that OHA has arranged to receive this training.

Most likely these trainings were precipitated by this OIP finding reported by West Hawaii Today as quoted in a Civil Beat article:

The Office of Hawaiian Affairs violated the state Sunshine Law when trustees corresponded by telephone and email before sending a letter to U.S. Secretary of State John Kerry rescinding an earlier letter by Chief Executive Officer Kamanaopono Crabbe.

Then the board violated the law again when it refused to allow public comment before conducting a closed-door session discussing Crabbe’s conduct.

That’s the finding of the state Office of Information Practices in a Nov. 7 opinion responding to a complaint by six Hawaii residents.

(thanks to Sen. Ihara for forwarding the agenda)