“
Protests against police brutality have erupted in more than 170 cities across the United States. In Los Angeles more than 100 people were arrested. From Oakland, California, to Providence, Rhode Island, protesters walked onto major highways and shut them down. In New York, protesters blocked traffic across the city including at the the Lincoln Tunnel, West Side Highway, the Manhattan Bridge, Williamsburg Bridge and the Queens Midtown Tunnel. More than 1,000 protesters marched on the FDR drive, at one point shutting down traffic in both directions. Protester Henoc Montes was among thousands who rallied in Times Square.—Democracy Now headline 11/26/2014
”
“
In more than 30 U.S. cities, workers and students walked out of school or off the job Monday with their hands raised to protest the police shooting of unarmed black teenager Michael Brown. In Washington, D.C., protesters staged a die-in at the Justice Department. In Cambridge, Massachusetts, dozens laid down in a major intersection in Harvard Square. President Obama. meanwhile, issued his first major policy response, announcing a community policing initiative.—Democracy Now headline 12/2/2014
”

If I had to depend on the Star-Advertiser for national news, I’d be sorely out of touch with what is happening in the country right now.

While protests sparked first by the police killing of unarmed Michael Brown followed by a grand jury’s decision not to indict officer Darren Wilson have spread widely across the country, our daily newspaper thinks it is more important to report that Girl Scout cookies will be available electronically.

Yes, that was on the national news page in place of arguably more important reports they could have run.

The coverage of the protests has focused on Ferguson, as though that were the extent of the outrage. Today, for example, the national news page reports the standing down of the national guard because things are becoming calmer in Ferguson. Articles on 11/26 and 11/28 are about calm returning to Ferguson. Contrast those with the pull-quotes above.

It takes only a few words to give a flavor of the growing unrest—why is there no space for even that in our daily paper? A spark has been ignited that has inspired protests against police brutality across the country, but for some reason that’s not supposed to be news here.

Today, the Twitterverse is aflame with reaction to the non-indictment of a New York Police Department officer caught on video applying an illegal chokehold which killed Eric Garner, who was allegedly selling illegal cigarettes, which in any case is not a capital crime.

It is very easy to follow these national protests via Twitter. Tweets often include links to articles and video coverage. The Star-Advertiser had its choice of potential sources, if only it were interested in reporting the breadth of national reaction. 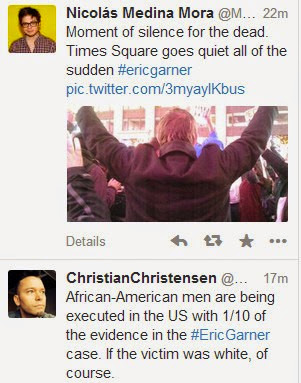 Obama’s remarks today are unlikely to satisfy anyone: Obama reacts to no indictment in Garner case (MSNBC 12/3/2014). The problem is not how to develop trust between police and the people as he repeats—it is to end the impunity with which police in this country can kill a black man or teenager on average every 28 hours. There should be reaction to his speech—will it be covered, or just the speech?

In New York City, outrage is based also on institutionalized racism going back at least decades—for example, the failure of the city administration and the justice system (if it can still be called that) to halt the unconstitutional and racist stop-and-frisk practices of the NYPD for years. Years. It took years and a new mayor to halt that one aspect of NYPD racism. It’s all one fabric, and it is about openly practiced racism, not trust.

Obama’s police body cameras won’t help. Garner’s execution was caught on video, but the grand jury did not choose to indict the officer. Obama promises investigations, but those have not yet yielded any action.

Dear President Obama: please get off that “trust” business. At this point, there is little possibility of trust between minority communities and the increasingly militarized police.

Oh—Obama declined to de-militarize the police. Again, words but no effective action from the White House.