Rally today at 11:30 at Honolulu Hale opposing expansion of sit-lie law to other areas of Oahu

Let’s face it—tourism is booming. While Waikiki businesses may not like finding the homeless outside, they are doing very close to nothing to assist.

For example, Honolulu has a chronic shortage of pubic toilets that affects residents, tourists, and of course the houseless. Sure, the Waikiki Improvement Association has arranged for one bathroom to be open, but what are people supposed to do—take a bus to get to the bathroom? 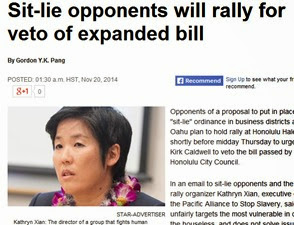 Instead of contributing to a solution, the WIA and other businesses, which are happy to contribute to the war chests of prominent politicians, have backed Mayor Kirk Caldwell’s draconian sweeps and the ordinances that criminalize homelessness and poverty.

Today there will be a rally opposing Bill 48, which would expand Honolulu’s new sit-lie ordinance to many other areas of the island. It is scheduled for 11:30 at Honolulu Hale (City Hall) and was mentioned in an article in this morning’s Star-Advertiser.

There are many reasons to oppose these sit-lie bills, including that they are selectively enforced against the homeless, and of course do not assist the target population in any way. Instead, they create suffering and further disadvantage for those targeted. With a criminal record it is much harder to find housing or work in the future.

At this time also, the city has no Housing First options available, nor will the shelters accept many of those now living on the streets [Side note: despite assurances that IHS will not turn away someone who cannot pay, during the FACE Housing Summit held recently at the State Capitol, a Hawaii resident, who is still a Canadian citizen, testified that he was turned away because he could not pay $150. Who else has been similarly turned away?]

With no place to go, these city ordinances may be considered status offenses and could be unconstitutional.

Daniel Gluck, senior staff attorney for the American Civil Liberties Union of Hawaii, submitted written testimony to the Council warning that the 9th U.S. Circuit Court of Appeals determined "criminalization of basic human functions in the absence of options for shelter violates the Eighth Amendment prohibition against cruel and unusual punishment."

Gluck said that additionally, discriminatory enforcement of sit-lie bans "could give rise to an equal protection challenge."

The city’s approach is not only wrong, but a waste of taxpayer money

The state has a plan, a budget, and understands Housing First. It appears that it is prepared to provide the supports that will help keep people in their apartments.

The city, on the other hand, appears clueless. City Managing Director Ember Shinn recently testified to the City Council that Honolulu was “in the vanguard of Housing First programs” nationally. The exact opposite is true. While the city has enacted laws that would criminalize houselessness, it has no active Housing First program yet. In order to possibly escape constitutional challenges the city proposed isolating the homeless in their own tents on a Sand Island tract that may be contaminated. Even if that proves not to be the case, it is not Housing First. City funds could more appropriately be spent on real Housing First and the necessary support services.

An alternative is to let the state run the Housing First program and contribute to making that a success. And finally, until there is an alternative, punishing people (and potentially giving them a criminal record) for “basic human functions,” the City Council should have waited before even considering its punitive ordinances.

Finally, as we have seen especially during the Kakaako raid last week in advance of the Hawaii Five-0 chase scene filming, the city doesn’t even follow its own ordinances—they destroyed, rather than stored, personal possessions.

What does this say about governance in Honolulu?

There’s a rally today 11:30 to 12:30 at Honolulu Hale. You can join if you think there is a better approach to Honolulu’s housing crisis than criminalization.