One thing has been nagging me since the Thursday raid on the homeless residents of Kakaako. How could someone take a tent, including personal items such as ID, money, medicines—or a kid’s school stuff—and throw it into the compactor at the back of a garbage truck, to be destroyed? 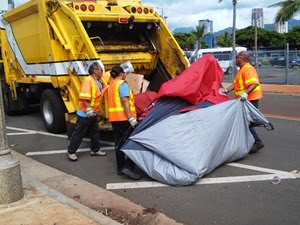 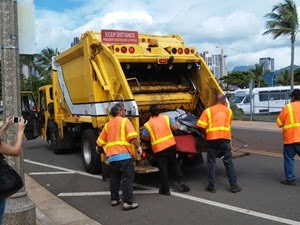 From all reports it appears that city workers, who ultimately report to Mayor Kirk Caldwell, did exactly that on a large scale. Around 100 people were treated this way. Since the raid was conducted during the daytime, some people were off at work or at school, and they would have lost everything.

By not putting belongings in bins so that they could be reclaimed, as the law requires, they rather expeditiously destroyed what they seized. Why the rush? 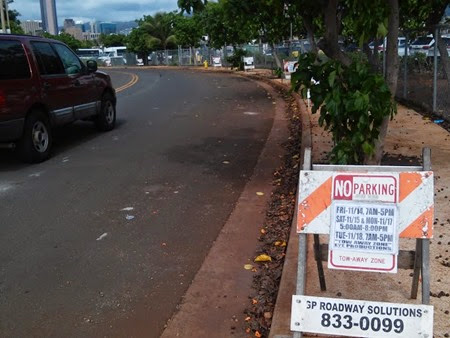 This is one of the No Parking signs put up after the raid so that Hawaii 5-0 could film their car chase scene over the next few days.

Why didn’t city workers refuse to do that dirty work? Do they have any trace of the so-called “aloha spirit” left in them, or for that matter, any trace of humanity? And what of the police who oversaw the operation?