Planning to the people—we can create better housing for Honolulu 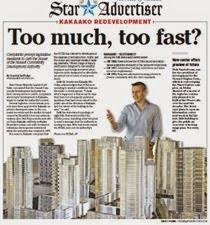 What’s wrong with this picture? Plenty. For one thing, do we really want Honolulu to look like a mindless conglomeration of grey buildings?

(Not to say that what we want matters to those who are in charge.)

In fact, the image deceives. Developers are allowed, in Honolulu, to drastically change their plans from the first application for approval until the last blue glass window is glued in place (or however they attach them). Which is to say, should Kakaako be built up as much as the illustration shows, it won’t look like that at all.

Now, the phrase “a Hawaii sense of place” is often used, but I am not sure what that means any longer. A massive installation of luxury buildings certainly isn’t Hawaii. But what is?

In truth, we cannot define what a future Hawaii should look like. Why? Because we have not been given an opportunity to participate in planning our own built environment.

What is an appropriate density for development? Where should development take place? What should be preserved? What is important to us, as residents, as opposed to the profit created for developers represented by these luxury units?


Residents lose as ultra-rich are provided for 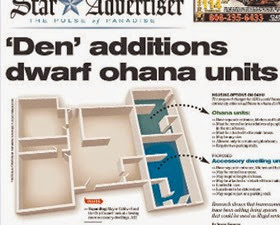 Notice that the rest of us are supposed to live in “dens” or “micro-units.” This is problematic several ways. First in my mind is that when have we agreed that only the rich will be able to live in quality customary housing (one or two bedrooms, say, or a studio) and we are to be content with dens?

Next, these plans may not work, or may be grossly insufficient to satisfy the need for affordable rental units. They don’t address the imperative to repair a grossly negligent public policy that has created the current homelessness crisis and condemned so many residents to a life of poverty and living in overcrowded conditions.

There are plenty of so-called Ohana units that are already occupied illegally, so will not be added to a new pool of available housing. By way of illustration, when we arrived in Hawaii so many years ago we rented a house in Makiki. At about the same time we moved in construction began behind the garage—it was to be an “ohana” unit we had not been told about. We had no extended family with us, of course—the landlord simply rented it out as as studio, and pulled out the illegal appliances each time when informed there would be an inspection.

Clearly, inspections are not effectively enforcing the restrictions, and so the number of “ohana” units that might appear if the regs are changed is unknown—many are already occupied as rental units.

The inspection process is far more defective than even the ohana situation demonstrates. 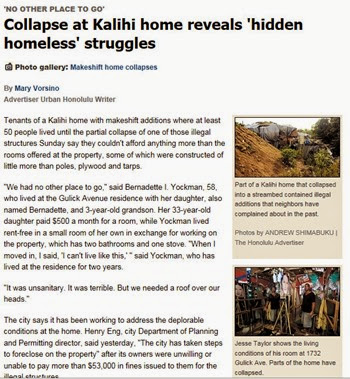 Check out the Honolulu Advertiser story from 2008 in the illustration at left for pictures of the sad structure made of scaffolding occupied by 50 tenants at  1732 Gulick Ave. who paid $250 to $750 a month rent and made use of two bathrooms and a stove in the main house.
Now get this: the city knew about the scaffolding for at least a year, and concerns were raised, according to the article, for at least five years earlier. Yet they did nothing until it ultimately collapsed:

The Honolulu Fire Department also raised concerns about the residence, and last year sent a letter to the city asking that the situation be addressed quickly because of unsafe conditions, a spokesman said.
…
The addition to the home that collapsed and fell into a streambed behind the property was built much like scaffolding — with floors made out of thin wood and tarpaulins used to shield tenants from the sun and rain. There are several such additions on the home, some of which were at one point as high as four stories, neighbors said.
…
Jay Young, who moved in next to the Kalihi home eight months ago, said he has been trying to get city and state agencies to take action against the owners of the house at 1732 Gulick Ave. for months. He said his complaints have spurred little action. Meanwhile, other neighbors say they also have been raising concerns about the house for at least five years.

Click on the pictures in the original story for larger images.

(This related story reports that tenants were made to take strange injections… click on the link to learn more.)

This does not bode well for the safety of ohana units, micro-dwellings or container housing that many advocates offer as a solution to house the homeless. Those are supposed to provide options for those unable to stay in their homes due to a combination of low pay in Hawaii and out-of-control rental demands. We should aim higher than that—people want decent standard housing. Let the rich wait. They have other options. 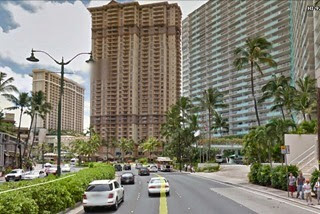 I wonder if this snip from Google Earth is a “Hawaiian sense of place”—right at the entrance to Waikiki?

This is what tourists see as their taxis approach Waikiki on Ala Moana boulevard. Instead of the patch of blue sky that used to be there, a huge ugly megalith confronts them squarely. There’s nothing Hawaii about it. 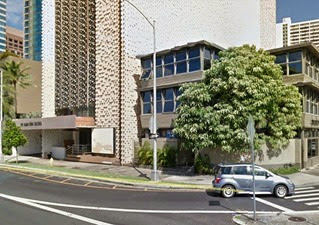 This building, ugly enough to be removed, was only partly painted for years and sprouted busted-up dish antennas on the roof. Yet it remained, and remains still. Too bad there aren’t ordinances against ugliness. The gridwork façade has been ripped off and it looks even uglier now, if that’s possible. 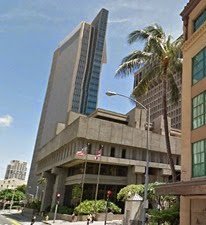 Driving along S.King Street one sees this building. There must be better views, but you can see that at the top right there is a little bit of concrete protruding. To me, it looks like something the oncologist should remove.

Now, I’m not quibbling about the design decisions made by First Hawaiian Bank or its architects, but only use this as an illustration of what we can expect. Other buildings may have their own quirks. Quirks cost money, which the owners apparently have.

Dallas Texas (as an example) also has a variety of building styles. There’s one that looks like a cigarette lighter. Good for them. Those expensive, unusual buildings created a “Texas sense of place”—lots of money applied lavishly to concrete, steel and glass.

Not too far from the First Hawaiian building is a cliché blue-glass condo that has lanais stuck on it, looking to me as though they were an afterthought and attached with superglue. Again, I realize that I am no one to criticize architectural design, but I’ve seen better (and worse) and wish for better. My point is that anything goes. No cost is spared, no building lacks for strange ornamentation. First Hawaiian could have saved a few bucks, no doubt, by eliminating the concrete thingy, but they have the bucks, so why not.


Anything goes, that is, except affordable housing

Imagine that the developers drooling over Kakaako were required, from the beginning, to commit to also construct or fund affordable rentals either as part of the Kakaako community or elsewhere? Some might choose to forgo development altogether. Others might go for it. There needs, however, to be a plan, and a system of regulation to make sure the housing is desirable (no micro-units!) and that rent is controlled in perpetuity.

That’s easier to say than to do, of course, and I know it. But the current situation is not workable for us, and if we, the people, could participate in the planning of our own urban spaces, we would likely not do it this way. Micro-units may be intended as a temporary solution, but you know that they will turn out to be permanent. I don’t think that’s what we want. That’s what we’ll get, unless there is a substantial change in the thinking of our state and city leaders.

“Planning to the people,” I say. We can do better than this.