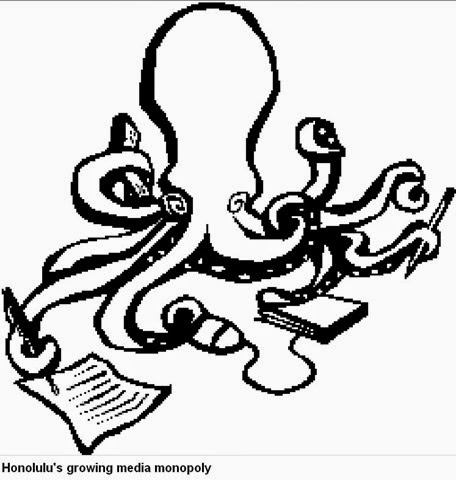 When Oahu Publications announced that it purchased the two Big Island dailies, West Hawaii Today and the Hawaii Tribune-Herald, from Stephens Media, I felt a spark of appreciation for Hawaii’s alternative news bloggers (here on Oahu, Ian Lind and Henry Curtis, for example).

Even Civil Beat doesn’t go as far as these unpaid writers in digging through the obvious to reveal the essential.

Oahu Publications, best known as the owner of the Star-Advertiser, also owns The Garden Island newspaper on Kauai. And now the two Big Island dailies.

That leaves only Maui (the Maui News) blocking a complete state-wide takeover of our daily news. [I emailed the Maui News but didn’t expect and didn’t receive a reply as to their status. Is Oahu Publications looking for a complete statewide monopoly? Shudder.]

Monopoly means little or no competition. It means editors don’t have to demand better of their staff. It means that readers, who have no choice, are no longer the target audience—pleasing advertisers who create the profit and politicians whose agendas the news organization wishes to further become priorities. But news? Who’s going to complain (well, besides the bloggers)?

How is a reader to know that they have been given only part of a story? 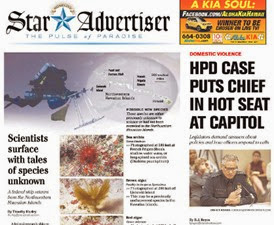 Here's a snip of the front page of the Wednesday, October 1 newspaper. Note the headline in big, black, bold letters: HPD CASE PUTS CHIEF IN HOT SEAT AT CAPITOL. You’d think it was a case of Ebola or something to merit that unusual screaming headline.

The story itself was important, but that wasn’t the story. All you might discern from the front page is that the HPD is always trying to improve.

The story that perhaps most readers and certainly concerned citizens were waiting for was whether the officer caught on video in an apparent violent confrontation with a woman was going to face charges, and what will be done with regard to the officers who showed up but failed to file the required police report. The news (revealed on the continuation page) was that no charges will be brought and we don’t know if anything has or will be done about the failure to file reports.

A monopoly can get away with that. There’s no other paper out there trying to do better.

And speaking of Ebola, this monopoly is spreading in Hawaii faster than the actual virus ever will. Which is more dangerous? We now have one confirmed case on Oahu, one on Kauai, and two on the Big Island. Where’s the antidote?

Well, there is no good alternative, but we do have some exceptional bloggers.

Check out Henry Curtis excellent coverage of the same legislative meeting, State Legislators grill Honolulu Police Department on Domestic Violence procedures , posted today (Ililani Media, 10/5/2014). It’s a fine example of reporting, and because it is a blog, has space to give the subject the attention it deserves. Plus, it contrasts in detail what we’ve see in HPD’s handling of domestic violence situations with another location that does much better. Henry’s readers know that we can do better.

If we are to bring about change, we need to know these things.

If you still have Wednesday’s paper, contrast the printed story with Henry’s.

Henry Curtis usually writes about energy and the environment. His articles reveal what we need to understand if we are to eventually drive down the obscenely high cost of electricity in this state. Yeah, it’s another monopoly situation, and again, we are the losers unless we learn and then work for change.

Meanwhile, one of the latest articles posted on Ian Lind’s blog demonstrates why his dedication to investigative reporting is so rewarding to readers. In a way, I hate to say this, I’m glad he doesn’t work for the newspaper, but of course that is a very selfish viewpoint. But would he be allowed to print, for example, Reporter snagged in ongoing city ethics probe (ilind.net, 10/3/2014)? Or, Is ‘ohana housing the way to address the crisis in affordable housing? (ilind.net, 9/30/2014)?

The snagged reporter is former citycouncilmember Nestor Garcia, who was named by Romy Cachola as one who allegedly committed the same kind of ethics violations that Cachola was accused of and settled by paying a record large fine.

As Ian notes, not only did KHON avoid mentioning the situation one of its own reporters seems to find himself in, but other media have avoided identifying the alleged miscreant as a reporter as well.

Because Ian’s second article mentioned above, removing the restrictions on ohana housing, could hurt developers, would the daily newspaper even go there?

Or what about Gathering of religious conservatives poses risk to Aiona campaign (ilind.net, 9/29/2014)? A newspaper benefits from campaign ads (though TV really rakes in the moola), so this kind of expose likely won’t be covered by the commercial media.

Ian’s net is cast widely and his catch is rich. Reading Ian’s work in comparison to what usually passes for news in this town is like eating a nourishing dinner in place of a visit to a fast-food joint.


Even Civil Beat enjoys a kind of monopoly by virtue of its size and funding, and sometimes it shows. The only example that comes to mind immediately is not a strong one, but by way of illustration—neither the newspaper nor Civil Beat reported that Board of Education head Don Horner was criticized at his confirmation hearing for shutting out students, parents and teachers by rescheduling BOE meetings for a time when none of those principal stakeholders could attend.

Under Horner’s leadership, meetings were moved to daytime working hours. Even the student representative had trouble with it, and parents can hardly be expected to give up half a day or a day’s work for a measly two minute audience before a board whose members often looked bored with the whole thing anyway.

Instead, only the objections to Horner’s religious affiliations got the news spotlight. Even his shrugging off of responsibility for schools giving discounted rates for church use of their facilities was left unexplored.

In fact, some changes were made to the BOE agenda to resolve the complaints, to Horner’s credit. It’s not perfect yet, and the current board is not going to hear the complaints that could be presented to the elected board because they will only hear matters on the agenda, and only for a severely limited time.

I don’t know that on-line competition would bring better reporting, and this is a small town, after all. Another billionaire is not likely to feel we need a Civil Beat clone. Besides, they do make a tremendous contribution in many ways, and we badly need them. Unfortunately, they are not a printed newspaper.

So again, good that we have dedicated bloggers, even if their audience is small in comparison to the big guys.

Read: ilind.net, Ililani Media, and other alternative news sources you can tune in to via your computer or phone.