Are we getting the truth on ISIS? Probably not much more than usual…


“ROBERT PARRY: Well, there’s no question that [Iran-Contra] was one of the most important stories of the 1980s and really the 1990s, when you get to the end of this and the CIA confessing. But it’s also a story about the failure of the mainstream press that extends to the present, goes through the Iraq War, the failure to be skeptical there, and goes right on to the present day. So it’s not an old story; it’s very much a current story.”

We can learn what to expect from today’s news coverage of the renewed US involvement in the mid-East by reviewing how badly the press has served us when critical national issues confronted this country in the past.

What is Robert Parry talking about in the pull-quote above?

NERMEEN SHAIKH: A new film out in theaters this week tells the story of one of the most maligned figures in investigative journalism: Gary Webb. In 1996, Webb published an explosive series in the San Jose Mercury News titled "Dark Alliance." It began, quote, "For the better part of a decade, a San Francisco Bay Area drug ring sold tons of cocaine to the Crips and Bloods street gangs of Los Angeles and funneled millions in drug profits to a Latin American guerrilla army run by the U.S. Central Intelligence Agency."

It’s impossible to condense this story into a nutshell (please click the link, or better yet, see the movie if it should play nearby). The Democracy Now segment is, of course, about a reporter who researched and broke the news of the Iran-Contra drug trade, even posting it on the Internet, which had not been done yet at that time. It’s also about how the mainstream press turned against him. Ultimately, Gary Webb committed suicide as his colleagues refused to support him.

The drug trade was not just something “out there” someplace. The trafficked drugs were part of an epidemic that devastated neighborhoods in this country. Often that part of the Reagan-era conspiracy is omitted when Iran-Contra is described in the media.

The CIA later admitted what it had done. Yet:

ROBERT PARRY: The New York Times, they do a story that is half kind of mea culpa, we should have done more with this, it was worse than we thought, and half Gary Webb’s still an idiot. The Washington Post waits several weeks and does a rather dismissive article. And the L.A. Times never reports on the CIA’s findings. So even though Webb was proven correct, he’s still considered a flake who got a story wrong.

Sadly, the national press we are supposed to rely upon deliberately chose to mislead its readers, to lie to them and instead protect the government. Yes—even when the CIA admitted what had been reported, these three newspapers chose the dark side.

If you crack open most any copy of the Star-Advertiser, you’ll note their reliance on stories syndicated by those same three newspapers. In middle of the first section of each daily paper are several pages of outsourced national and world news in addition to the bylined featured news articles. These days, that’s the norm—a local or regional newspaper is not going to have a Baghdad bureau, or even a Washington bureau nowadays. So they need to get that news from someplace.

And unfortunately, we can finger those same “leading” newspapers for cheerleading this country’s invasion of Iraq, and as Robert Parry suggests, we may not be able to trust them as the US goes into another phase of prolonged  warfare against ISIS or ISIL or the probably fictitious Korasan Group or whatever.

In fact, the earlier segments on the same program already provide information that you may see only in the alternative press. Who are we really supporting in Iraq? Is our bombing going to work? How come Kobani is falling to ISIS? Who is ISIS anyway, and why are they advancing so smoothly and rapidly? Check out today’s program the answers are there. 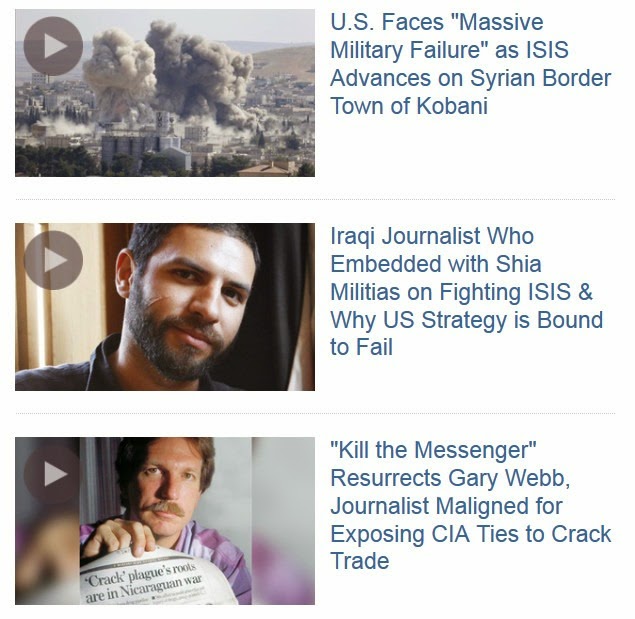 I suggest that by watching today’s Democracy Now (10 pm on `Olelo tonight on Oahu, or at democracynow.org on the web) you will learn much more about the US bombing campaign against ISIS, who we are and are not assisting, and yes, whether this bombing is successful so far. Reports on Democracy Now often include interviews and statements from reporters who are or have been there, whether it’s Iraq, Egypt or other hot spots, rather than the talking head retired generals who seem to populate national TV news.

You’ll also learn a little more today about the CIA and the sad condition of the free press in this country—which may influence how you trust government statements or how you view stories on ISIS that will appear in the mainstream news going forward.

Ok, if you like, you can watch the program right here. Click the thingy at the lower right to make it larger. A full transcript is on their web page each day.

The original content of the Democracy Now program is licensed under a Creative Commons Attribution-Noncommercial-No Derivative Works 3.0 United States License.