“
I'm sure local officials will try to counter that locking up poor, homeless people isn't their goal. Oddly, they seem pleased with themselves because they are providing a tent city with some services for the homeless and billing their "plan" as Housing First and even "supportive housing."

The organization I represent has a national reputation creating what is actually supportive housing. Supplying temporary tents on an island — which conjures up offensive scenes of World War II internment camps — fits absolutely no one's professional definitions of Housing First or supportive housing. It, however, does give a whole new meaning to pitching your spin.—op-ed by Deborah De Santis, Star-Advertiser, 9/11/2014
”

The idea of a proposed homeless camp on Sand Island may appeal to residents of Waikiki, but at last night’s informational meeting, it did not sit well with several community members.

City Managing Director Ember Shinn and her staff presented an informational hearing last night at the cafeteria at Puuhale Elementary School at which they presented their plan to those who attended. The auditorium was almost fully packed, largely with community members from the area and other parts of Oahu, but also with advocates, some state legislators and city officials.

At the meeting, attendees were told what the city’s plan is. There were no handouts, only a powerpoint presentation and an easel at the rear of the room with this clearly hastily-prepared Google Earth pasteup (click for larger): 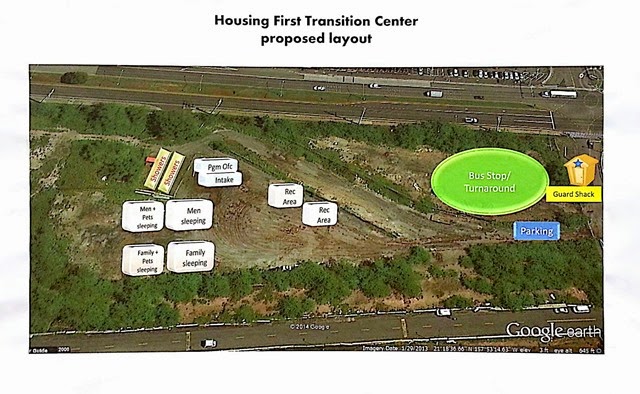 A very good account of the meeting was posted by Civil Beat, here.

The Star-Advertiser also covered the event, but perhaps space was limited and of course the paper was about to go to print, so the Civil Beat account is both more complete and more accurate (for example, in response to questioning about pollutants, CB noted that the city responded that they would cover the site with asphalt, not concrete, as the S-A reported).  [So the kids are supposed to play outside the tents on hot, stinky asphalt?? Whose great idea is that?]

Doug Matsuoka was there recording video, so a record of the meeting should be posted soon. In the meantime, some observations.

In City Managing director Ember Shinn’s introduction she objected to the characterization of the site as an internment camp, noting that her father (?) was interned there at the start of World War II. My thought: well, I can understand that. But then, she might also think of how the people whom the city wants to remove to this camp site will feel about being put there, and of course, what it says about a city administration that is willing to put them there.


Homeless will experience living in a gated community

Some members of the Sand Island or Kalihi communities expressed concern that residents commuting to the site will defile their neighborhoods, or spoil surfing which is popular off the island. In response, the city noted that there will be security, and offered to clean up anything reported to them. They pointed to the guard house and roving security present in the camp at all hours.

Ok, so we now have an alternative to the term “internment camp” that Ms. Shinn objected to: “gated community” may be more accurate as well. At the right of the photo above is the guardhouse that will challenge anyone entering the property, it was explained.

The question of site pollution was not raised during the city presentation, a notable omission. They responded only when questioned by activist Kathryn Xian.

Considering the press that this issue has achieved, you’d think (well, I think) it should have been covered rather than covered up in the city’s presentation.

Failure to consult with houseless residents can doom city’s plans

Last night’s meeting was to “tell” or perhaps “inform” the community of the city’s plans. We heard toward the end that an RFP for the site has been issued. What we did not hear was that the community was involved in the planning.

Indeed, in her introduction, Ms. Shinn expressed great pride that this is the first time that a city has attempted this kind of a project on its own—and that prior examples of “tent cities” or “safe zones” were planned and organized by communities, not by cities.

To the extent that they might have succeeded, perhaps it is because they were planned by the community itself and not by a municipality that they did so.

It amazes me when the city is forced to withdraw plans because of community objections. One can blame it on “NIMBY”—or alternatively, admit that imposing a solution on a community without adequate involvement or consultation is an intrusion, not a solution.

The city’s exclusion of those community members most affected from its plans to criminalize homelessness and to isolate them on hot asphalt in a camp on a detached island may ultimately frustrate those plans and stick taxpayers with the cost of the experiment.

An intrinsic side effect of the city’s plan is that of necessity, as they stated, they will screen and exclude anyone with a record of violence. They would have to do that. No argument.

But wait until the residents of Waikiki learn that as people are “removed” from their streets, they are “left with” the most violent still there.

Involving the community is not rocket science

The Daily Show regularly lampoons misguided plans with a meme in which its “correspondents” assemble community members on a kind of bleacher set—say, three ascending rows of three people each. The correspondent then discusses the issue, and finds that everyone is opposed. Or, perhaps, if it is racially-oriented topic for example, that only the white guys agree. The lampoon is very effective.

There are plenty of ways to involve the community in planning. First and foremost, one might place actual homeless people on the planning groups. But in terms of process, there are plenty of options. One can hold several guided community meetings to listen, form and review plans. One can gather a smaller group first to suggest alternatives. Anything would be better than holding informational briefings to “tell” people what you are planning to do to them or in their neighborhoods.

Consensus building is a well-known art. It doesn’t mean everyone in the community agrees, but it is the pathway to development and acceptance of successful community planning.

There is no place in a Housing First program for anything but housing first. Even if the city succeeds in transferring some people into the camp, they are working against, rather than with, the model. And at what cost?

At the meeting, the city confirmed that the camp will be designed to handle only 100 people, and that they will consider it a success if there are 40 occupants.

At least one questioner confronted the presenters with the costs of putting all this into place for just 40 (or 100) people, given the large number of homeless on Oahu. [Note that expenses for plastering the ground with asphalt aren’t yet in any budgets because the city neglected to consider potential pollution at or near the site.]

Neither the city administration nor the City Council (with the possible exception of councilmember Breen Harimoto) apparently understand the basics of Housing First.

The internment camp gated community was initially dubbed as “temporary Housing First.” Yet there is no such thing.

Housing First is an approach that offers permanent, affordable housing as quickly as possible for individuals and families experiencing homelessness, and then provides the supportive services and connections to the community-based supports people need to keep their housing and avoid returning to homelessness.

[quoted in Framing the problem: Honolulu government does not understand Housing First, 9/11/2014]

Basically, the city needs to convince the public that the punitive measures it is moving to enact into law—which criminalize the homeless but do nothing to assist them—are not so bad because it is providing them with an alternative to the streets.

But the “alternative” would accommodate as few as 40 people. The questioner pointed out that 40 is close to negligible.

The city apparently plans to have buses accompanying the police sweeps to take people to the Sand Island camp as an alternative to police action (if they do that, they may likely open the door for legal action).

The city administration revealed its priorities in its RFP for its Housing First plan. Here is the very first objective of the program (p. 15):

To alleviate the impacts of unsheltered homelessness on residents, businesses, and visitors in the City and County of Honolulu through the creation of appropriate housing opportunities that will facilitate the transition of unsheltered homeless persons and families from public and private property not meant for human habitation in targeted neighborhoods, to appropriate housing in the community.

This is not a client-centered approach. But then, the city is trying to take care of businesses and developers first, they have made it clear.

This morning’s Star-Advertiser front page headline seems to recognize this: “City Council approves bills targeting homeless.” Yes, targeting. They are being targeted. Kailua resident suggests a better use for buses

During questioning, a Kailua resident noted that there are homeless people sleeping on the streets of Kailua also, and asked why the city doesn’t put the support services it described for the camp onto a bus and come into the neighborhood to provide support to the homeless right there in Kailua?

See, when the community has an opportunity, new ideas can result.

Is there any chance that the city will do that? Not likely.

Another community suggestion utilizes container housing, central services, and a wall of storage surrounding the facility 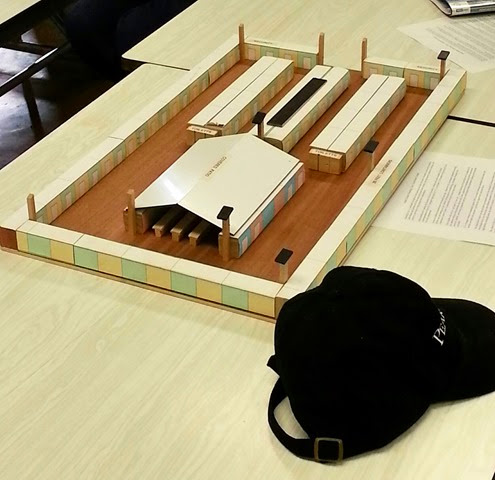 Someone went to the trouble of making and bringing a model. Of course, any idea has pros and cons, but this illustrates that the community is very capable of working cooperatively on an issue.

The city should focus on getting Housing First accepted and underway

It’s 2014, and Honolulu is not in the ‘vanguard” of Housing First as Ms. Shinn expressed at a City Council meeting. It has yet to begin, while other states reported positive data as early as 2004. We need to catch up.

The Kailua bus idea (for example) may have merit, but it depends on the city wanting to do something for rather than to its homeless residents. In any case, Housing First should be first because it is proven to work. Of course other worthwhile ideas could be considered as well that don’t get in the way.

The city isn’t at that place yet where it is working hard to alleviate homelessness or poverty, or to keep individuals and families from falling into poverty.