Egypt calls for US restraint over Ferguson

What? Egypt is calling on the US authorities to show restraint in dealing with protestors?

This is a story tailor made for newsman Jon Stewart, who plays a comedian on TV on the Daily Show.

As the Al Jazeera article notes,

Up to a thousand supporters of the former president, Mohamed Morsi, were killed in the clashes according to HRW.

This was a reminder, though, that there is more news in the world despite our fixation on events in Missouri: Israel is bombing Gaza again, the whole Ukraine scene is playing out, ebola is taking its toll, Syria is still aflame, warplanes are bombing Libya, and more (flash: ISIS just beheaded journalist James Foley!)… too much, in fact, to fit on the limited number of pages in our daily paper even if reporting on world events were a priority for them.

In fact, with regard to events unfolding in Ferguson, a newspaper is next to useless unless they carry lengthy, in-depth followup articles. Our daily paper was going to print last night even as events were unfolding in Missouri. The small amount of space that will be allocated to Ferguson tomorrow won’t get close to the coverage available on-line from major news outlets and social media.

This just in: another black man has been shot dead not far from Ferguson. The story is till unfolding, check your tweets or the breaking news app on your phone.

Renowned peace researcher Johan Galtung has held (and this is very paraphrased) that democracies (compared with other forms of government) may be peaceful at home, but are not necessarily better in their foreign policies, and particularly not where peace is concerned. This has certainly been the case with the US, which has supported dictators (e.g., the military-controlled government of Egypt) or highly oppressive regimes (e.g., Israel) and involved itself in almost continuous wars while maintaining peace at home.

Galtung would probably correct me, pointing out the extensive institutional violence internal to democracies. We are seeing that institutional violence play out in Ferguson, Missouri. While white people may be able to enjoy domestic “peace,” there is no peace for black people in either the north or the south of this country. 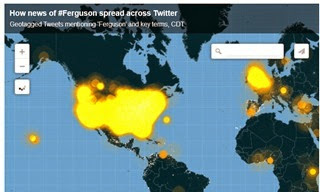 As this Twitter map of hashtag #Ferguson illustrates, the world is on to this now, if they weren’t already.

#Ferguson is an occasion when issues of racism, police violence and lack of accountability for their murders, and the militarization of police forces nationally, can perhaps be discussed. Will the discussion take root? Who knows. The next major storm or sports event could chase Ferguson off the front pages.

Meanwhile, though, an important conversation has indeed begun. Example: 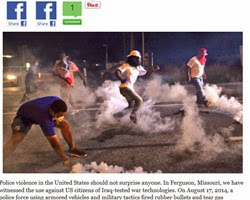 Police violence in the United States should not surprise anyone. In Ferguson, Missouri, we have witnessed the use against US citizens of Iraq-tested war technologies. On August 17, 2014, a police force using armored vehicles and military tactics fired rubber bullets and tear gas canisters at peaceful protesters who had been demanding justice against Darren Wilson, a killer cop who took the life of Michael Brown, an unarmed black teenager.

Who knows if the conversation will continue (check Democracy Now, though, to see). Or stay tuned on Twitter. You don’t even have to have an account to follow the news, though it helps.

And who knows if Florrisant Ave (360 degree panorama at link) will become the next Tahrir Square… it doesn’t quite have the correct ring to it. For now, though, it’s all we have.