“
The news: A Vancouver charity, RainCity Housing, is converting city benches into pop-up shelters for homeless people. And by giving homeless people in this rainy city some dry coverage and a place to rest.
”
“
These benches would have not been allowed to be placed there without the approval of the City of Vancouver, who have vowed to end homelessness in it's city by 2015 and has been promoting projects such as this and many other to try and achieve that goal. These types of initiatives don't happen without some political will behind them and the city of Vancouver has made some big efforts to curb homelessness.
” 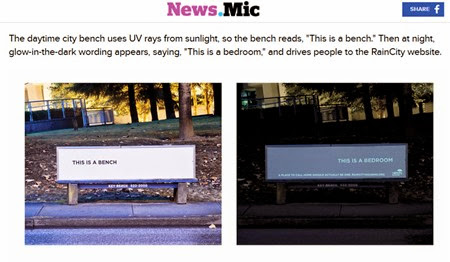 The daytime city bench uses UV rays from sunlight, so the bench reads, "This is a bench." Then at night, glow-in-the-dark wording appears, saying, "This is a bedroom," and drives people to the RainCity website.

Visit the website for more pictures of these benches.

Look, I don’t know if converting benches to shelters at night is a good idea or not. The point is that Vancouver appears to be working on solving the problems its homeless residents face.

In Honolulu, homeless people themselves are viewed as the problem.

I thought the innovative bench idea was very clever. It also helps set the tone of public discourse if people see that something positive is being done.

In Honolulu, both the City Council and the Mayor believe that criminalizing the houseless is a productive approach—it’s sad that cruelty and punishment is the best they can come up with. The city’s approach finds resonance in much of the commercial media which emphasize complaints over evaluation of the city’s approach in comparison to other cities working in the same issue.

The state is not much better. Recently in the news again: a state legislator wielding a sledgehammer that he charged to his state expense account:

[Pat Saiki, chair of the Hawaii Republican Party] identified Rep. Tom Brower as among the worst offenders for buying a sledgehammer to destroy shopping carts being used by homeless people.

Brower did indeed buy the sledgehammer with his allowance, claiming the $37 expense as an office supply. He was reimbursed for the expense Nov. 15, but he submitted a repayment to the House on Nov. 19 after receiving so much public backlash over his stunt.

Until Housing First is up and running and people have a place to stay, and until Honolulu accepts that public toilets are a public service and necessity the city should embrace, passing laws designed to punish is simply inhumane.

It’s also poor civic management, and a waste of money, since providing the housing as soon as possible is less costly than what the city plans.