Will Honolulu continue night terror raids on the homeless?

Since it’s a biological imperative to pee, giving someone a citation will not stop them from peeing

“
HONOLULU (HawaiiNewsNow) -It's one of the busiest transit centers in the state and the only one serving the central downtown area, but despite its approximately $20 million price tag— there were no public restrooms or even water fountains built at the Alapai Transit Center.
”

Ultimately, employee restrooms were unlocked and opened to the public. It was not only the homeless but bus commuters who were peeing in the bushes near the fence.

The Honolulu City Council thinks it can clean up the streets by passing a law against peeing or defecating on the streets.

It can’t work. All of humanity pees, somewhere.

At least the citation might be useful as toilet paper.

The city has provided no alternative. If you want to change a person’s behavior, you have to give them options to choose a better behavior first. Without Housing First or public toilets, unless the police intend to warehouse houseless people in our jails, passing and enforcing cruel and punishing laws won’t work.

Oh, sure, if they selectively enforce the law in Waikiki, then it’s my neighborhood that will stink. I’m not sure I’d like that very much.  Or it could be your neighborhood. Think about that for a moment.

One City behavior that should be changed is its aversion to doing maintenance of public facilities, which likely is behind the lack of public toilets in Honolulu.

It’s a fundamental principal that a maladaptive behavior cannot be extinguished until a more suitable behavior is in place. It’s impossible to work with a homeless person or family on the streets when survival is the top priority for them every single day.

If Honolulu puts people into some kind of housing, then not only would the streets smell better, but everyone would lead better lives in what we call “paradise.”

Mental health issues can be addressed much better if there is a medicine cabinet to keep the pills and a quiet place to talk about problems and solutions.

The chances of landing a job are improved if there is a closet to hang clean clothing.

No one is sitting on the sidewalk if they have a chair to relax in at home.

And guess what—it’s cheaper to do Housing First than what the city is doing now, if one must make an economic rather than a moral argument.

The other unaddressed side of the problem is that neither the city nor the state are taking any action to prevent draconian rent increases from driving people onto the streets.

Several other states and municipalities have implemented some form of rent control or rent stabilization—generally during the Great Depression when the need was very obvious—but not Honolulu. With no ceiling on the amount of rent charged by landlords, it is inevitable that people will continue to lose housing on into the indefinite future.

Most of us sleep tight at night, secure in our own homes. Not so those without a roof over their heads. There’s violence on the streets of many cities.

And in Honolulu, there’s the possibility of police raids in the dead of night. Yes, the HPD has employed the same “terror tactics” that US special forces were hated for in Iraq and Afghanistan—the dead of night raid. 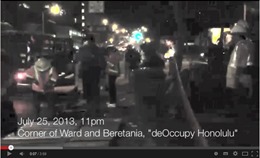 Most homeless people do not have video cameras and don’t want to risk retaliation, but the (de) Occupy folks did document some of the raids. The caption in the video above says 11 p.m.

That’s the dead of night.

Do the HPD come knocking at doors in Hawaii Kai to force residents to remove property illegally left on the sidewalk for bulky trash pickup several days too early? Does the HPD bust in to any home at 10:30 p.m. or 4:15 a.m., rousting the occupants?  No. But that’s when they have carried out night raids on the streets.

The city and Honolulu police selectively enforced ordinances aimed at the homeless during the night.

The City Council is about to pass two new ordinances, and a bill prohibiting obstruction of the sidewalks passed out of the state legislature (never mind that the City routinely obstructs sidewalks all by itself, with no help from the homeless).

Make no mistake, a law against sitting down on the sidewalk will not be enforced against tourists—only selectively, against someone who appears to be homeless.

And who but the homeless will face armed police in the dead of night?

Who but the homeless will have their colostomy bags thrown into a garbage truck? Yes, that’s a garbage truck below, parked during a raid at the spot near “Piano Park” where the colostomy bag was taken, along with the personal possessions including ID and medicines of others, according to their report. No due process, just seize and dump. 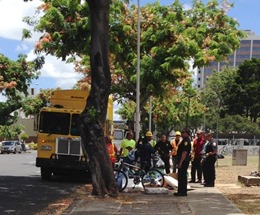