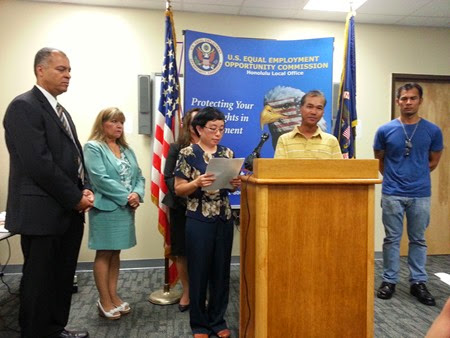 The EEOC (Equal Employment Opportunity Commission) held a press conference this morning to announce a settlement in their human trafficking cases with four Hawaii farms. It won't be "disappeared news," it should be on the TV tonight and in the paper tomorrow.

EEOC broke down the $2.4 million settlement approved by the court as follows:

Holdouts Maui Pineapple and Global Horizons will go to trial later this year.

I have some audio I'll review to see if it's good enough to post here for the record.

But it was interesting to note that the first questions were not about the settlement itself, which is a great accomplishment on the part of dedicated EEOC attorneys here and on the Mainland, and which will bring economic relief for up to 500 Thai workers trafficked to farms in Hawaii. Instead, several questioners asked whether the EEOC was planning to pursue charges against Aloun Farms.

Let's recap the Aloun case in brief outline by way of explaining why it is still invoked, even though it was dismissed some time ago.

The Aloun case preceded a similar Department of Justice case against Global Horizons, both of which were ultimately dismissed. It was the first case filed, and it was against a local farm, while Global was a California employment company. Aloun is local, Global is Mainland.

The Aloun Farms case took a few unusual turns. Originally, the two brothers agreed to a plea agreement and paid $190,000 to the federal court to be distributed to farm workers. It looked good for the workers, who would receive money to help repay the massive loans they had taken out to pay recruiters. In an unusual twist, Judge Kobayashi threw out the plea agreement. And the federal court, which had malingered in writing checks to the workers, returned all the money to Aloun. So the workers got nothing at that point. Not a single check had been written.

I'm told that the guilty pleas and any admissions or other information they contained are null and of no use now. Though the pleas were once agreed, without acceptance of the plea arrangement, the defendants were and remain innocent of all charges.

Some worldwide media focused attention on the upcoming trial. Al Jazeera, for example, sent a crew to Hawaii to do interviews. Human labor trafficking was in the news, and Hawaii was in focus. It’s publicity that no one wanted, but it was hot news.

So the case went to trial. Very shortly, astute defense attorneys discovered and announced that the Department of Justice prosecutor had erroneously instructed the grand jury which brought charges against the Aloun Farms brothers. During the time span covered by the case, the recruitment was not, in fact, illegal. It became illegal only later. The lead prosecutor became ill. Within a couple of days, the case collapsed and was dismissed by Judge Kobayashi.

Press coverage at the time generally celebrated Aloun Farms' escape. They were not, of course, found guilty, but on the other hand, the facts or purported facts on file with the court or to be presented as evidence died with the dismissal. Any hope that workers, their families or advocates had that compensation would be paid to the workers evaporated once again. Overseas news coverage terminated.

I think the sudden dismissal of the case was disruptive. It was unforeseen--it was on no one's radar screen. It left behind celebration on one side, but disappointment and dismay on the other. There seemed to be no path forward.

Time passed. The DOJ case against Global Horizons also collapsed. A new crew of prosecutors, in possession of a large number of hard drives and boxes of paper taken from Global offices, seemingly couldn't cope with the process of screening the information. They needed to sort out, for example, communications that were protected by attorney-client privilege. The court was not willing to extend deadlines repeatedly, and so that case, once billed as the largest human trafficking case in US history, went down in smoke.

Finally, the EEOC filed civil cases on behalf of a large group of workers employed by several Hawaii farms and Global Horizons. There were bumps in that road as well. The EEOC was told by the court that a very short statute of limitations protected many of the farms from legal challenge.

But today we learned that at least $2.4 million will be available to be directly distributed to workers, in addition to $1.2 million from the Del Monte Fresh Produce settlement reached last year.

Finally, it appears near certain that there will be compensation for the squalid and dangerous conditions endured by the workers at these Hawaii farms.

... but the Aloun farms workers have yet to have their day in court. I think that, and the sudden twists and turns in the abandoned DOJ case against Aloun, still linger in the minds of those who followed that case closely.

If you Google for it, old news stories float up, both supporting and condemning the farm owners. While the case was alive, it didn't seem as though an alternative path, such as EEOC action, was needed. Then poof, it was all over.

Perhaps the EEOC heard the questions today, but given the realities imposed by federal law, it's not clear what action, if any, they can take at this late date. Yet they appear to be the last hope to bring forward the facts about working conditions at Aloun Farms and to gain compensation for the workers, if warranted.