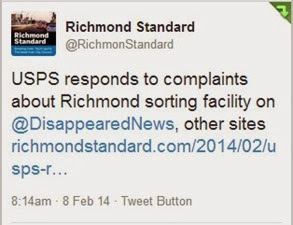 If someone is concerned about the length of time a package takes to arrive in Hawaii or one of the Pacific Islands, they may google the last facility in their tracking report: often the Richmond [CA] Sort Facility. Until recently, the majority of comment complaints were posted on Disappeared News articles, but it seems other websites have overtaken DN in the Google search rankings.

Yesterday the Richmond Standard website posted a response that they were able to receive from a USPS spokesperson. See: USPS responds to complaints about Richmond sorting facility (Richmond Standard, 2/7/2014).

Although the complaints cited in the article referred to delayed delivery, the response was limited to damaged packages, which represent a small percentage of the complaints posted. Please click the link to see the full response as received by the Richmond Standard.

Kudos to that website for locating someone from the USPS to respond.

Perhaps they will assist a bit further. I just sent the email below. Of course, the USPS is welcome to comment or otherwise respond directly right here, but I’m glad that the Richmond Standard staff took up the issue, and if they post further dialogue, I’ll be glad to link to their website.

(email sent to the Richmond Standard)

Thank you for posting USPS responds to complaints about Richmond sorting facility (2/7/2014).

The majority of the anonymous comments posted on Disappeared News are not about wayward or damaged packages but about delayed delivery. Without detailed knowledge of processing procedures, and in the absence of any way to contact the facility by phone, I and the commenters have tried to piece together what might be happening in these reported instances.

First, I think it is important to acknowledge that the number of complaints is not a measure of the efficiency of the facility--when a package is delivered on-time and intact, there is no reason to search the internet and post a comment. Having said that, there appear to be several key issues that were not addressed in the USPS response posted on the Richmond Standard yesterday.

I'm assuming that mail destined for Hawaii, Saipan and other Pacific Island destinations is loaded into containers and shipped over water. This information was obtained from several postal employees by way of explaining the long delivery time after a parcel enters the Richmond Sort Facility. If accurate it is safe to assume that there is some variability in delivery time because containers need to be loaded, stacked on a ship, transported, then unloaded, trucked to a local sort facility, unpacked and processed for delivery to the addressee.

The overwhelming majority of comments report that the estimated delivery date given by USPS tracking information at the time of mailing and as the package proceeds through the system is wildly inaccurate.  This may not be Richmond's fault, but it is compounded when either the sender or the recipient is told that there is no further information, or that it is not yet possible to lodge an inquiry or complaint.

The problem is likely due to a limitation or a defect in the USPS tracking system--it generates a false expectation of delivery by a certain date.

The problem appears to be compounded because there is no scan posted when a package is loaded into a container. This, I believe, may be the source of the "black hole" phenomenon reported by commenters and that I experienced myself.

The combination of an unrealistic estimated delivery date (generating false expectations), lack of progress information in tracking reports, and inability to receive an adequate response from the system by phone certainly may infuriate many of those affected.

As to damaged packages, this is a fuzzy issue. I know that postal employees are usually careful to advise mailers that packages must be properly packed, and that shipping by Parcel Post rather than by Express Mail requires far better attention to internal packing and wrapping. Still, some commenters have reported receiving alien contents apparently stuffed into broken packages. There should be procedures in place to prevent this from happening. It is one thing to discover that a package is broken from whatever cause, and another to insert contents into it that may not be the original contents.